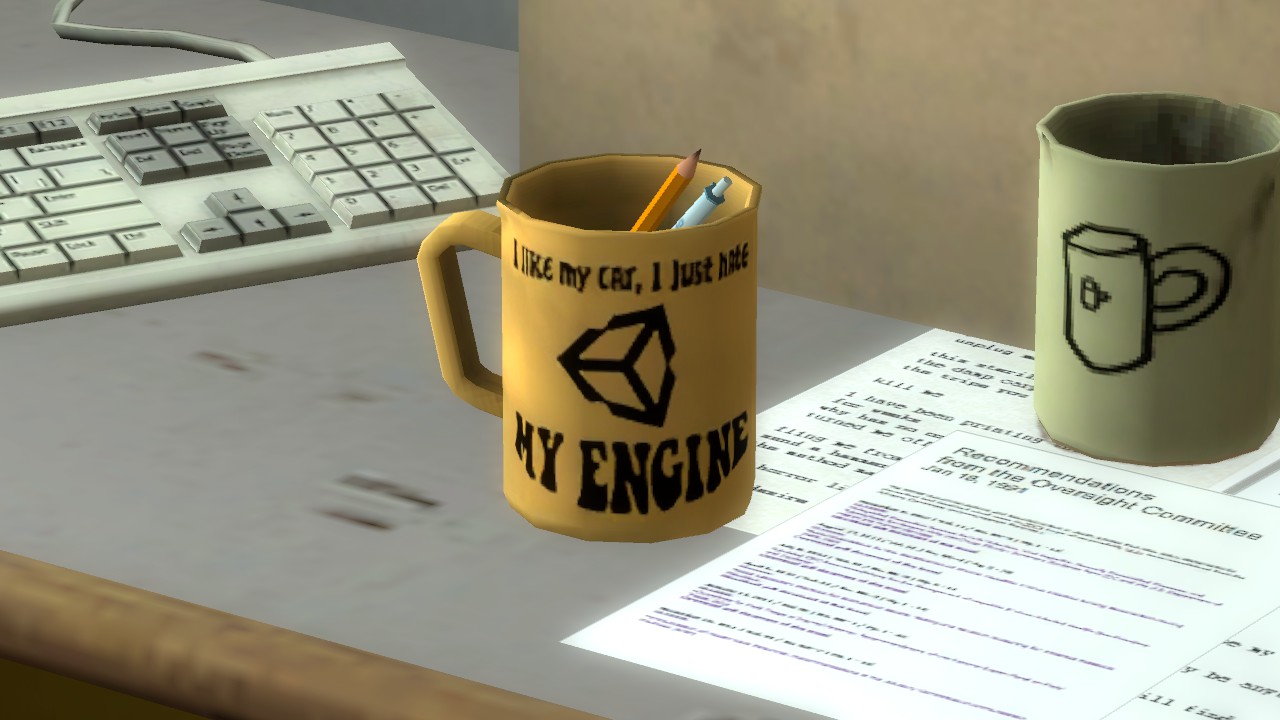 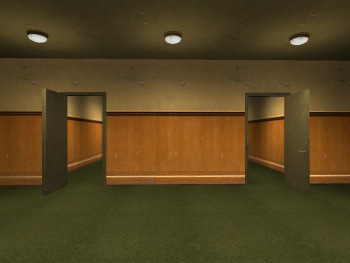 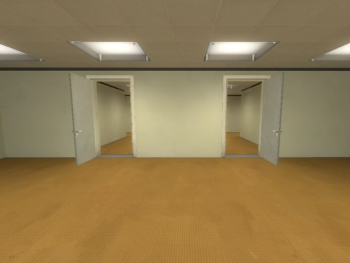 The original mod and the steam re-release

When writing the HD steam remake Davey again used Source, probably because he was familiar with the engine. (This time the engine from Portal 2, which was itself mostly based on Half-Life 2.) There’s significantly more content, and it’s much more polished, but at the end of the day just like the original mod was running on Half-Life 2, the Steam release of The Stanley Parable is essentially running on Portal 2.

There have been many games made in old, open engines like Source. Counter-Strike, Garry’s mod, Antichamber, Sonic Robo Blast, MM8BDM, DOTA, and, of course, The Stanley Parable all forked off from existing games and became their own thing, but there’s less and less opportunity for that now. And I haven’t even begun to touch on accessibility or localization. Fan translations are tremendously valuable, and are made far easier when dialogue, voice audio, and text are exposed as editable files, rather than precompiled hash.

I think one of the key features that really makes a game naturally extensible is the way it physically stores files on the disk.

For example, here’s how sourcemods work: you download the mod and save it to Steam\steamapps\sourcemods\. That’s it. Restart Steam and if you have the base game, the mod will show up in your list of installed games automatically. Run it and it’ll fire up the game, patching in the mod files when appropriate.

Maps for Source games are stored in the maps folder. You can put any BSP file you like in common\Half-Life 2\hl2\maps, fire up the game, run map [file].bsp, and you’ll load into that level. Since each logical resource is stored as a file, it’s easy to add levels or replace textures by simply replacing the files. Steam will even do this for you on-the-fly with sourcemods.

Compare this to Unity games, where all the files and resources are thrown together in huge .assets archive files that are only readable with specialized user hacks. There’s nothing close to logical segmentation, and arbitrary on-the-fly patching is a fever dream.

This article is about sourcemods, but I’m such an adamant believer in the logical file approach that I want to talk about the game I think did modding best: Blockland.

Blockland got it so right🔗 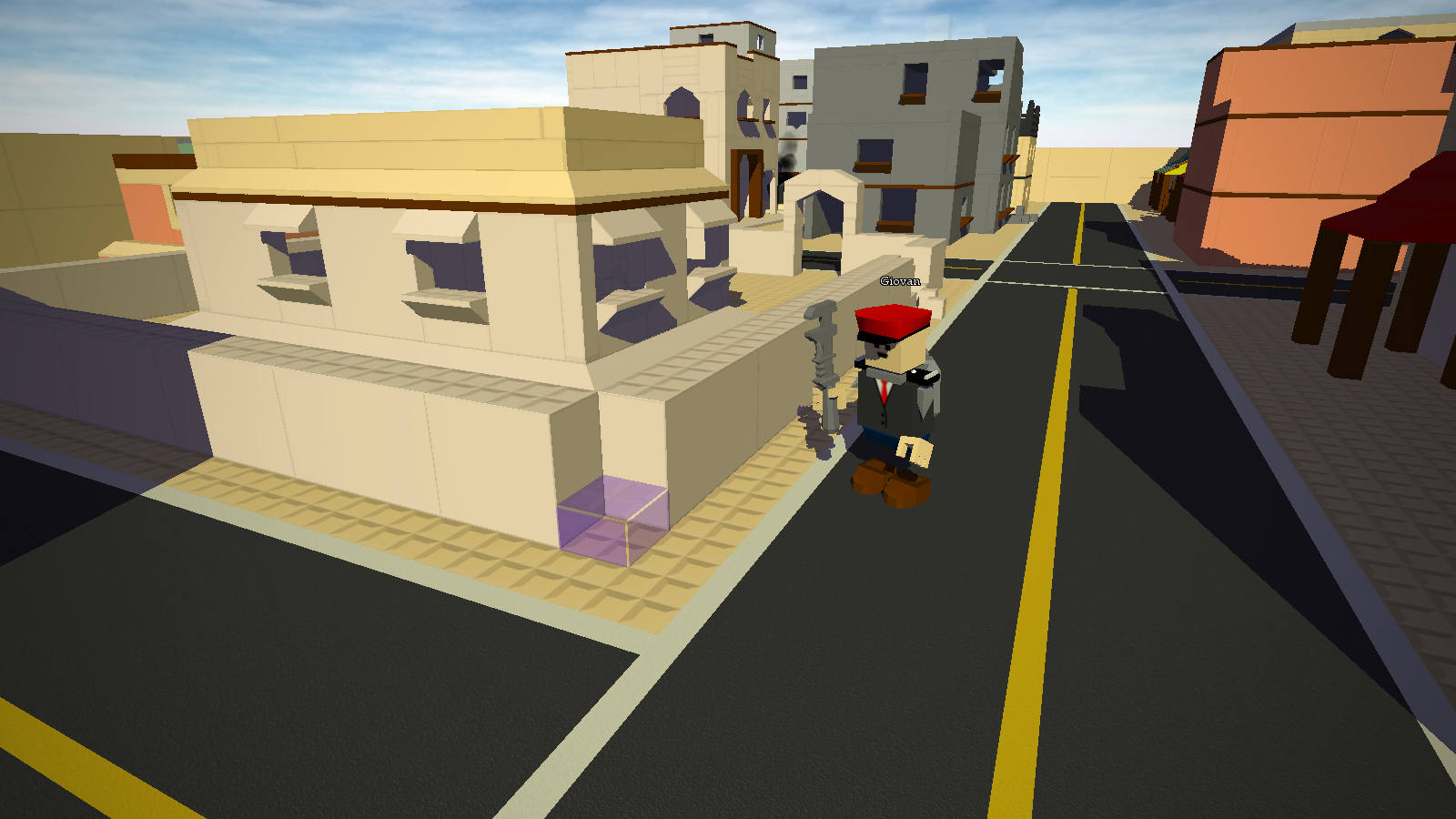 Blockland used to be one of my favourite games, back when it had an active community. It’s a pre-Minecraft Lego-style building game, a bit like Roblox but populated with adults that hated each other.1 I need to write another article about Blockland some day, it was a really interesting experience. (Don’t try to play it now, though, it’s been unplayably broken for years.)

The base game is pretty slim, but driven by a powerful “add-ons” system. Add-ons — which were written in TorqueScript2 and packaged in zip files — defined almost every aspect of the game. Every block shape, every custom texture, every tool, every weapon, every vehicle, every particle, every scripting trigger.

The few things the game ships with were themselves add-ons which could be selectively toggled or studied. If you wanted to build something for the game, you could just find how Blockland did it, make a copy, and start editing. Because the whole game was built around add-ons as first-class members there arose a thriving modding community. Users didn’t even have to extract these addons; the game read and assembled everything at runtime. This made it them simple to handle and easy to distribute.

I still love Blockland’s add-on system. When I think of how to design a truly extensible game, it always comes back to mind. There are plenty of other games that use logical files excellently, of course — Hack n’ Slash, Haydee, Rimworld, Stellaris, Audiosurf 2, and Starbound, to name a few — but the way Blockland treats the base game as modular add-ons has always made it stand out to me.

So, are Unity games like Ultra Deluxe preventing new creators from building on past work like they were able to, effectively pulling the ladder up behind them? Well, yes, but don’t get angry at crowscrowscrows just yet.

To be clear: you definitely shouldn’t still be making games in Source in 2020. It’s particularly good at the incremental design I’ve described in this article but it’s really bad at a whole list of other, more important things. If you’re making a game, you really need to be using something modern like Unity or Godot (or Game Maker for something simple) if you want to use an engine at all. I also can’t give Source too much credit; it’s very easy to author new levels and visual assets, but the mechanics of the 3D engine are much less flexible. Being developed with Unity lets Ultra Deluxe have much better game flexibility, as well as lighting, shaders, and console support. The fact that modern engines have shifted to a model that’s less easy to extend than Source was for maps is just a modern reality, I certainly won’t fault Ultra Deluxe for that. 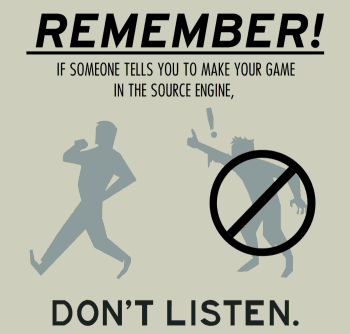 With the current tools, developers need to make the active choice to support modding or extending their game, which is a shame. Any mod support needs to be planned from the start, and extra resources budgeted accordingly. “Making your game moddable” is an extra step you have to take, and significantly increases the complexity of your project. Many developers do this, of course, and the Steam Workshop has become a great way of supporting extensibility in games. But for games like The Stanley Parable where there isn’t an obvious use for moddability, there isn’t the built-in support for extensibility that there used to be.

From a developer perspective, picking on Unity again, making an extensible game isn’t easy. Unity has a robust project management system with organized assets and design tools, but since it’s precompiled there’s no way of exposing those interfaces to users. If you google “Making a moddable unity game” you’ll probably get this thread from 2015 that covers some of the technical challenges. Since user content doesn’t have access to the pre-compilation C# environment at runtime, Unity’s default code pipeline makes first-class addons impossible. One common workaround has been to use lua scripting for mods, but that’s a major level of additional complication. Suffice it to say there is not a robust structure for automatically extensible games in Unity.

Interestingly, a lot of modern games that do have robust mod support aren’t made in common game engines. Gunpoint, Haydee, Starbound, and Stardew Valley, for example, aren’t made in Unity, Unreal, or Godot. Stardew Valley was actually written from the ground-up in C# using XNA, which the developer has admitted you probably shouldn’t do. It’s counter-intuitive, but the modern quick-to-start, easy-to-prototype, high-compatibility game engines are inadvertently worse at modding than just doing everything from scratch. That just shouldn’t be.

In my opinion, it would be tremendously beneficial for game engines to have built-in tools for extensibility. From what I’ve seen, those systems don’t exist in a robust form in modern engines, and that’s a real deficiency. In my ideal world, structuring a game as to be easily extensible would be simple, easy, and the engine default. There’s no pressing need for developers to manually make games like The Stanley Parable extensible, but if they weren’t experimental projects like The Raphael Parable never could have existed.

A fairly recent change to Unity has been the “addressables” module, which makes referencing custom assets slightly easier. Hopefully this represents an interest in making the engine more conducive to modding, but only time will tell.

Meanwhile, good news for The Raphael Parable fans: a fellow called max_34 is working on a Stanley Parable mod called The Stanley Parable: Ultimate Edition. From what I’ve heard, in addition to new levels, environments, and endings, it’s going to include a remastered version of The Raphael Parable. That’s going to be released some time after Ultra Deluxe, I think. As much fun as it is to see people enjoying what I made, seeing someone build on it is really something special. 🦆