I remember seeing a whole kerfuffle about 5G around this time last year. Not the mind-control vaccine, the actual wireless technology. People (senators, mostly) were worried about national security, because Huawei (the state-controlled Chinese tech company, who is a threat, actually) was getting its 5G patents through and making its claim on the next-gen tech IP landscape. Maybe Trump even needed to seize the technology and nationalize 5G? Everybody sure had a lot to say about it, but I didn’t see a single person address the core conflict.

Before we get to 5G, let’s go way back to VHS for a minute.

The basic idea of the “format war” is this: one company invents a format (VHS, SD cards, etc) and make a push to make their format the standard way of doing things. Everybody gets a VHS player instead of BetaMax, so there’s a market for the former but not for the latter. Now everyone uses VHS. If you’re selling video, you sell VHS tapes, and if you’re buying video, you’re buying VHS. If you invented VHS, this is great for you, because you own the concept of VHS and get to charge everyone whatever you want at every step in the process. And, since everyone uses VHS now, you’ve achieved lock-in.

Now, this creates an obvious perverse incentive. Companies like Sony are famous for writing and patenting enormous quantities of formats that never needed to exist in the first place because owning the de factor standard means you can collect rent from the entire market. That’s a powerful lure.

And that’s just talking about de facto standards. This gets even worse when you mix in formal standards setting bodies, which get together and formally declare which formats should be considered “standard” for professional and international use. If you could get your IP written into those standards, it turns your temporary development time into a reliable cash stream.

“5G” is one of these standards set by standard setting bodies, and it’s a standard packed with proprietary technology. The most important slice of those is called SEPs, or “Standard Essential Patents.” These are the Patents that are Essential to (implementing) the Standard. In other words, these technologies are core and inextricable to 5G itself. This figure represents only the SEPs: 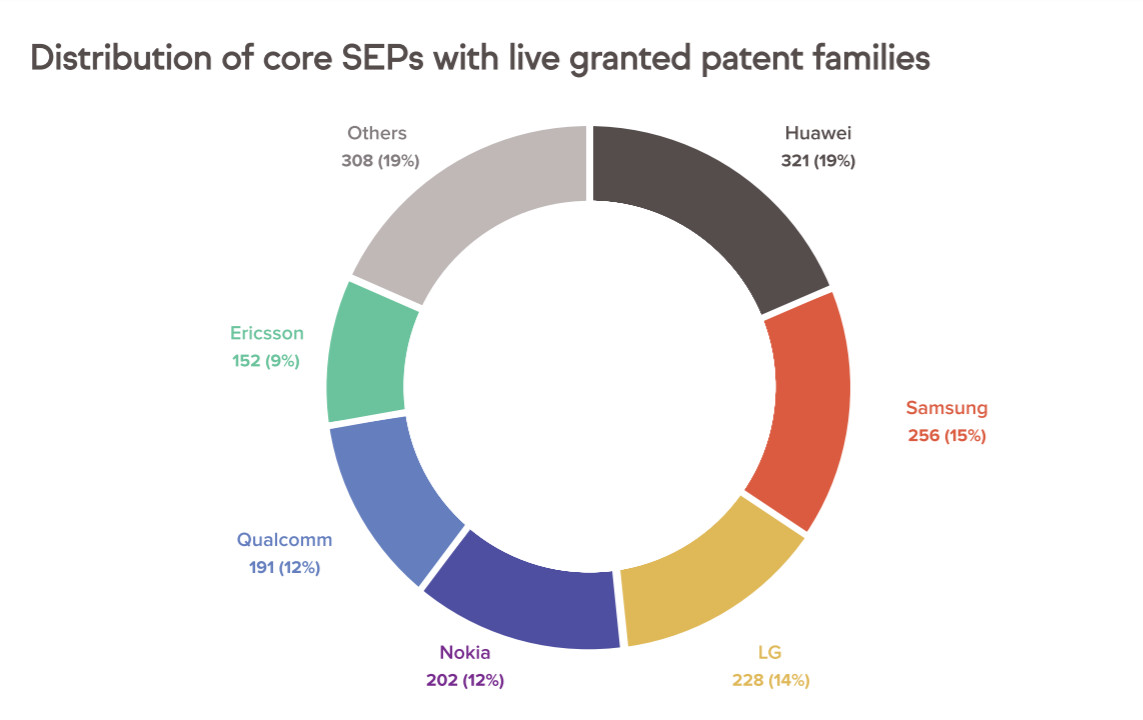 These are the patents where, in order to correctly implement the standard, you must either license the technology from the rightsholder or infringe on the patent. Standards often involve hundreds or thousands of SEPs, which makes negotiating the licenses to use standards a long and arduous process. (There are whole companies that exist just as an intermediary for this process, so customers can license the technology with one party.)

Given the obvious danger of exploitation here, standards bodies make a point to compile “open standards”. That sounds good, but the problem is the definition of “open” here is frequently debated, and often different between organizations.

The name “open standard” invokes the idea of “open source”, and implies that the technologies in play would be open to use. This is not usually the case. Patents and Open Standards, a NISO whitepaper by Priscilla Caplan, does an excellent job of summarizing this issue in the current landscape, and the range of interpretations that currently exist:

An obvious question raised by the NISO incident is whether patented intellectual property belongs in open standards at all. To begin to answer this question, one first has to clarify what is meant by “open standards,” which, like many of the terms in common use, has no single authoritative definition.

A narrow definition of an open standard is one developed through an open, consensual process in which all identifiable stakeholders have been invited to participate. ANSI does require “openness” as an essential requirement of due process in an ANSI-accredited standards development organization.

[Open-source developer Bruce Perens] would allow patented technologies in open standards, provided the standards are free for all to implement with no royalty or fee. “Patents embedded in standards must be licensed royalty-free, with non-discriminatory terms.”

Robin Cover in an extensive Cover Pages essay [“Patents and Open Standards”] appears to go a step further, requiring open standards to be freely implementable not only without fees, but also without licensing:

By “open” we do not refer simply to standards produced within a democratic, accessible, and meaningfully “open” standards process; we refer to standards that can be implemented without asking for someone’s permission or signing a license agreement which demands royalty payments. We mean “open” in the sense of implementable within an open source framework, free of legal encumbrance.

So, when you hear “Open Standard”, you might be imagining the latter definition – where the technologies involved are free and safe to use without legal issue – while the standards setting bodies might consider the opportunity participation in the decision-making process sufficient to qualify it as “open”.

Standards bodies don’t require open-source, but they almost always require FRAND, or “Fair, Reasonable, And Non-Discriminatory” licensing conditions. In other words, if your patent is an SEP in a standard set by a standards body, you have to agree to limit the ways you license those patents or else the standards body won’t include your IP in the standard. This is the main mechanism used to limit the exploitation of standards patents. This isn’t a law, but an agreement between SEP holders and the standards bodies themselves, and litigating perceived FRAND violations can be a complex and costly legal struggle.

The concerns people have over the individual companies and countries who own SEPs is warranted, and the attempts to enforce clauses that prevent patent holders from exploiting standards is a laudable effort. But all this misses the larger point that the goal of the process is to make a communications standard, not make people money. Or, at least, not to just make a handful of people money.

Global Communications and Rent-Seeking are Antithetical🔗

The whole point of setting the 5G standard is to boost global communication abilities. Companies want to be able to communicate faster, sell customers better, faster devices, and build more sophisticated technology on the best possible communications platform. Countries want to be able to communicate internationally, so they want to set global standards as opposed to each region having its isolated network. The goal of 5G is 5G; its existence of 5G will generate more revenue and efficiency across the board, if it’s the best standard. The whole point is mutually beneficial communications that improve utility across the board. People already understand this, that’s why there are standards bodies in the first place. The purpose of the standards body is to make technology easier to implement universally, not harder.

Communications standards are a very special kind of technology that are most effective when they are both globally usable and the best technical solution. Using patents to bar usage behind licensing fees sabotages both of these goals; it makes the selection process economically driven because of the profit potential, which shouldn’t be part of the selection process, and licensing makes the resulting standard less useful per se.

Not only do licensing requirements make the technology more expensive to use, they actually makes it worse. As seen in the very concern that prompted this article, whole nations are fighting political battles over which patents become core to the technology, which companies own them, and which countries own them. There are layers and layers of lobbying that for-profit patenting has added to this process: lobbying that turns a conversation about technology and communications into a conversation about national security and the relevant dominance of countries. If that’s your priority – if your own dominance is your metric – the resulting standard isn’t going to be optimized for communications, it’s going to optimized for political compromise.

The Value of 5G isn’t in the Patent🔗

And, of course, all of this is totally unnecessary. You don’t need to milk a patent just to make 5G worth your while to develop. In communications and such, what you’re selling is enhanced ability and better access to content, not physical devices. You don’t need to find an extra way to make units sell because the IP is the product; every connected market in the world is already driving up demand for you. Having better network communications technology boosts the productivity of nearly every economic sector from its availability alone.

Also, I haven’t even touched on overbroad patents, which is the real monster problem behind the patent system. This is all an extra layer of problem on top of that. Sorry!

SEPs incorporated into international communications standards should not give the patent holders a right to charge rent on everyone on earth who wants to communicate. Right now, that’s the business model. These technologies are developed on the gamble that they might generate royalties in the future. If your technology is a flop, you’ve lost. (That’s right, this speculative system where you either get leverage on the world or lose your investment isn’t good for Samsung or Huawei, either.) This business model depends on the speculation of future rent-collection as the primary mode of funding, which breaks everything.

But without licenses, how do you fund development? Do I want to nationalize 5g? No, that would be incredibly stupid. I’m also not suggesting we somehow just demand that all SEPs are open-source without making any other changes. The incentives still have to be there.

There’s plenty of money to be made🔗

Patents encourage innovation. They directly stem from the scientific ethos to share knowledge that can be built upon by encouraging the publication of useful discoveries. They guarantee inventors exclusive rights to profit from their work for a set period of time, in exchange for making the details of the invention public knowledge. This is an excellent mechanism to encourage entrepreneurship and exploration into new and exciting areas, where your idea might be groundbreaking but you don’t have a secured funding yet.

This is not the case with 5G, or really any technology significant enough to occupy a major standards committee. There is an endless list of firms with an intense interest in getting the best possible next-gen communications networks deployed. Every telecommunications company wants to be able to sell 5G, every media company wants to be able to sell people content over 5G, every government wants to deploy infrastructure and even military apparatus onto 5G.

There could easily another way to fund this kind of critical research and development. Every technology and communications company already has a vested interest in communications networks being designed as well as possible. You could have a model where the research itself is funded – the actual work done on development, not just speculation.

If you set up a proverbial booth on a street (where, in this metaphor, pedestrians are major players in the business world) and say “Hey, if you pay me an enormous sum of money to develop it, I’ll make 5G be a thing that exists in the world”, you’d have companies lining up to make it happen.

Unfortunately, it’s hardly worthwhile for me to speculate about what the specifics of an alternate system would look like, though, because it won’t happen. Even though the current system is bad for everybody: everyone ends up paying rent to a technology company, and technology companies waste an enormous amount of resources putting together patents on technologies that don’t end up winning the jackpot. Far too much is invested in the current system, even though it’s the wrong one.

We can still identify and understand the core problem, though. There is a fundamental disconnect between for-profit patent development and open communications standards, which will always cause ripples of problems when forced together. As usual, the problem isn’t in the specifics of the players involved, but stems from the ideas in fundamental conflict.