Homestuck is once again lit up over fan merch. Homestuck and fan merch have a long and troubled history, but this latest incident is between artists, Redbubble, and Viz media. Here are my thoughts on that!

In late May 2021, artists who sold Homestuck merch on Redbubble got this email:

Thank you for submitting your fan art for Homestuck and/or Hiveswap as part of Redbubble’s Fan Art Partner Program.

At this time, our partnership with the rights holder VIZ Media has come to an end. When a partnership expires, we are required to remove officially approved artworks from the marketplace. This means that your Homestuck and/or Hiveswap designs will be removed from Redbubble soon.

Here are a couple of things to keep in mind:

Partnerships come and go, but don’t worry. We’re looking forward to partnering with more awesome brands in the future.

Check out our Current Brand Partnerships list to see all the properties that are actively accepting submissions. For additional information, we recommend checking out the Fan Art Partner Program FAQ.

This hit a lot of people, and hit them hard:

to add insult to tonight's injury, redbubble has decided to spontaneously take down the main 12's sigil shirts off of the VE storefront on viz's behalf. the storefront they've been on for three years. without issue. that use alchemy symbols. which are public domain.

update on the redbubble situation: looks like if you have any currently running VE merchandise, you're officially an owner of limited edition products that we legally cannot reuse or redistribute.

what a fucking joke. 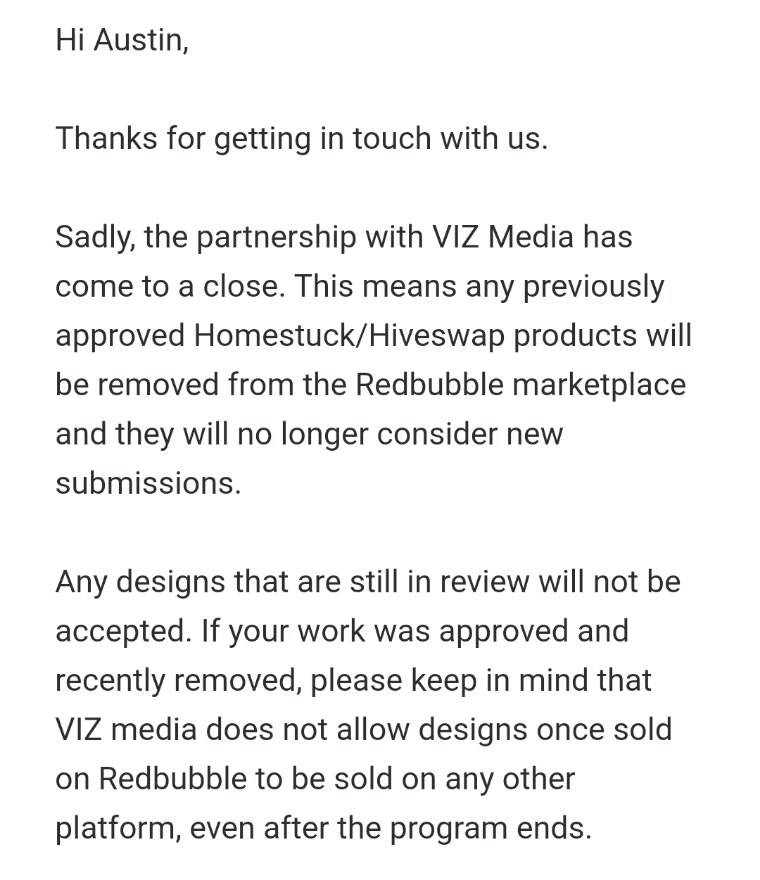 Unfortunately for Twitter and brevity this is actually the intersection of a couple different complicated issues, which I’ll try to summarize here.

Just gonna get this one out of the way right off the bat. Copyright law gives IP owners a tremendous amount of power over what’s done with their characters and designs, even extending far into derivative fanart. If you own Homestuck, you actually can take someone to court over selling merch of their fantroll, and probably win. That’s not a great starting point, but it’s the truth.

Eevee has a great write-up of why this is bad. I’d also point you to Tom Scott’s video about how copyright law isn’t designed for intermediate platforms like Redbubble, but suffice it to say, yeah, copyright law really sucks for fanartists, actually.

Now, copyright law sucks for fanartists, but that doesn’t explain what happened here.

The work on Homestuck that fell under the Homestuck franchise umbrella was extremely varied There was plenty of merch that was clearly copies from the Homestuck IP: stickers of panels from the comic, aspect designs, even duplicates of shirts that were already for sale on FFBF. These are cases where the rights owner clearly has an exclusive right to merchandise, and is well within their rights to demand you to stop. 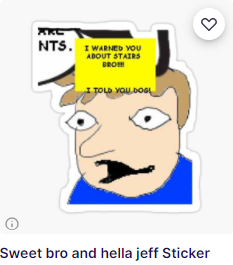 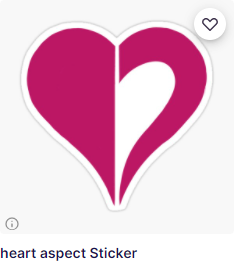 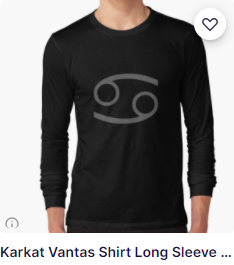 But there was plenty of obviously original work, too. Quotes from something Homestuck referenced, entirely original art of original characters, even public domain symbols on a black shirt. 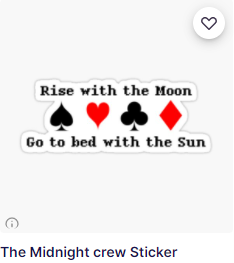 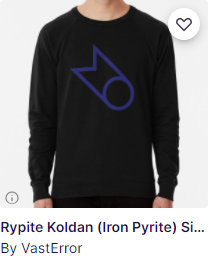 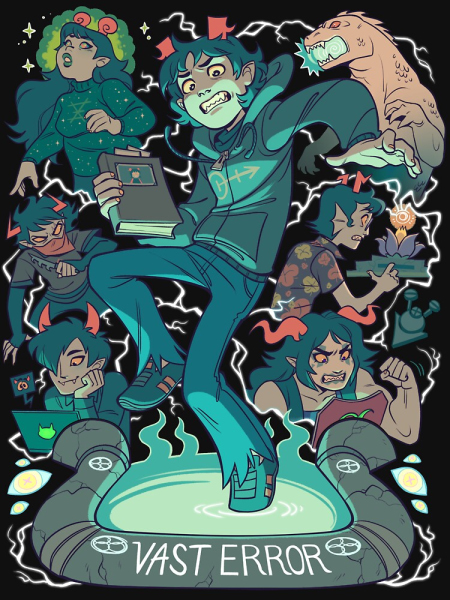 Designs that were literally just alchemical symbols on black shirts were struck down for being tagged Homestuck. Copyright law is bad, but it’s not that bad; tagging your product as something Homestuck fans might be interested in doesn’t mean the corporate entity that owns Homestuck now owns your design. So what’s happened here?

This particular issue centers around Redbubble’s Fan Art Program. Redbubble’s objective isn’t to make sure everyone is able to sell the work they’re entitled to, it’s to ensure the highest profit for Redbubble. Selling a few extra units generates revenue, of course, but being sued is such a tremendous risk that, in Redbubble’s judgement, it’s worth it to stay well within the good graces of any company who shows up, even if that means denying people a storefront to sell work they legally own. Because profit is explicitly the goal, here, the Redbubble system doesn’t offer artists the due process the copyright system would usually demand; actual legal rights take backseat to expediency and profit.

So what does this mean for fanart? Well, back to the Fan Art Program. Redbubble partners with certain franchises to facilitate Redbubble selling fanart of those works. Those agreements are between Redbubble and the companies, and likely vary, but include clauses like

Given the legal protections offered by the fan art program, Redbubble would rather you not make fanart of unapproved franchises, given the likelihood that such designs would open Redbubble up to potential legal consequences.

So here’s how that actually played out, here. Some time circa June 2019, Viz Media and Redbubble entered into one of these fan art partnerships. As part of this, RB granted Viz the right to manually approve any Homestuck art on the store, and gathered up all the “Homestuck designs.” This was likely done algorithmicly – finding everything using the Homestuck tag, or the name of a Homestuck character – and put it in the approval queue.

What people might not have known is this represented a fundamental change in their works’ ownership. Viz had asserted that it was the rights owner of Homestuck, and therefore the rights holder of the subject of your work. Anything they claimed to own, you were now selling at their pleasure, not your own. As RB’s FAQ says, “In exchange for their permission to use their IP, the rights holder may require you to give up certain of your rights in the work.” Continuing to sell your work on Redbubble apparently indicated consent of this.

So, what rights did you give Viz? Well, apparently, an exclusive license to the design.

It’s important to know that licensors do not allow previously approved designs once sold on Redbubble to be sold on any other platform, even after the program ends.

And thus solves the mystery of how Viz got the right to demand you stop quoting Eddie Morton. Redbubble handed the rights to Viz on a silver platter.

Once the agreement ended, Viz exercised its right to eradicate the design. A right Redbubble gave Viz via contract, and artists gave Redbubble via EULA. All this far exceeds what copyright law requires. Viz couldn’t reasonably demand ownership of those latter designs (they don’t own the idea of symbols against black, no matter who all they buy), but Redbubble surrendered it anyway to keep itself as protected as possible.

One thing about all this that stands out to me particularly is: why Viz? Viz Media keeps claiming to be the rights holder here, but is that even right?

According to What Pumpkin, Andrew Hussie still personally owns the rights to the Homestuck IP (the characters, symbols, etc.) Viz media owns a limited subset of publication rights for producing and marketing the physical hardcover collection and the epilogues. Viz certainly does NOT have an exclusive license over homestuck merch, a fact evident by FFBF;s continued merch store.

So… did Viz even have the IP rights it claimed to in 2019? Was the recent termination really part of regular negotiations (the agreement period lasted two years, almost down to the week), or did Viz just realize they don’t have the rights in the first place? I don’t know. I know What Pumpkin says Andrew still personally holds the rights (even though he doesn’t work at WP), but I’ve learned to take anything they say with a helping of salt.

I would love to have an easy solution to this. Heck, I’d throw a party if any one of the three separate issues at play here were solved. Given part 2, you might be tempted to cast blame at the artists who licensed their work to Viz. You’d think “They never should have done that, that’s the problem right there. They just shouldn’t have agreed.” This isn’t really a fair assessment, though. As I described, the licensing at play here was really snuck past people; they didn’t know that their inaction meant they were giving exclusive rights to a company, they were just glad they could sell their work again. Selling officially licensed fan merchandise seemed like a great thing, until it just wasn’t.

Big picture, it seems to me that store platforms like Redbubble are currently way over-incentivized to avoid conflict with big scary corporate rightsholders, and so err towards denying people the ability to sell art that they own. Redbubble’s policies are worse for artists than the actual on-the-books copyright law, which is already really bad! I reckon somebody should do something about that.