So, who is W.D. Gaster? Who is the big backstory, the Secret, the man behind the True Lab? Nothing. He’s the previous royal scientist, but through some unknowable horror he got deleted from reality. “Shattered across time and space”, according to another character who doesn’t seem to exist. He’s cut content who was conceived of as cut content. He’s a mystery by definition. The only story he gets is one of omission, the vague cosmic horror of not existing:

Have you ever thought about a world where everything is exactly the same… Except you don’t exist? Everything functions perfectly without you… Ha, ha… The thought terrifies me.

-still not Gaster, because he isn’t there

Of course, the story I’m describing here is emergent, not one he was crafted around. This is the narrative that arises out of Gaster’s mechanical function of… well, not being there.

Treating Gaster as a solvable mystery is an explicitly absurd quest in futility. He is unfixable. The answer is missing.

But Undertale isn’t about mysteries, not really. Undertale wants you to move on from Undertale. Undertale shames the genocide completionist and teases the pacifist stickler. 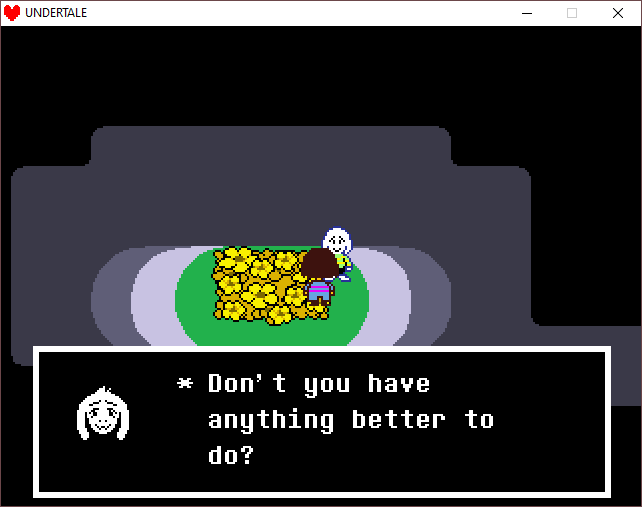 Undertale doesn’t want you to sit down at a corkboard and “solve” it. W.D. Gaster refuses to be solved. His whole character is defined by being missing, by not being in the game or even in the universe at all.

And yet Gaster demands solution. There’s just too much riding on it. With every ounce of weight Undertale gives to its plot, with every secret detail it includes about Gaster, it demands you care about him. He designed the SOUL machine that kickstarts the whole plot of the game. He gives Sans the knowledge he needs to nudge the timelines toward safety. He is all the loose ends and plot holes wrapped up into one character who isn’t available to be interrogated.

This isn’t like with the genocide route, where the player is shamed for starting a rampage for the sake of it. This is a mystery the game created, a mystery the story revolves around. The player is demanded to consider it, to solve it, to work towards solutions. But in the end they’re denied a solution. There’s a missing piece, and there always will be.

In a parallel to the way Asriel wants you to keep playing the game to the point of self-destruction, Undertale wants you to keep solving its story to that same end. It’s perverted, sure, but when it comes to Gaster it’s something Undertale deliberately hooks you into doing, not an expectation the player unfairly imposes on the work.

I’m forcefully reminded at this point about Folding Ideas’ excellent video The Stanley Parable, Dark Souls, and Intended Play, which makes this argument:

If there is crafted content on the other side of your misbehaviour, then it’s not actually misbehaviour.

If there is something that the game’s author simply flat-out, 100% did not want you to experience, did not want you to engage in, then it wouldn’t be there. Even when it comes to potential misbehavior using the rules of the system you’re placed within, externalities that they didn’t or couldn’t account for, like throwing garbage at NPCs, the only truly accurate sign that the authors don’t want you doing that is that nothing happens at all. This is because even a negative reaction, even the game pushing back against misbehaviour, is content.

The obvious example of subversively intended play is the genocide route – a joke he makes in the video – but I can’t help but think of the contrapositive alluded to in the quote above: if there is nothing, no content behind a path, then the game is making the strong, deliberate statement that it does not want you following that path. Gaster, a character defined by a lack of content, is then a whole degree of judgement further than the genocide route – maybe even the harshest a game can possibly discourage something. How viciously then must Undertale not want you to think about this?

But – for me, at least – this paradoxically creates a weird illusion of depth. The mystery being intricate, having scattered clues throughout the game, being tied to characters and mechanics I’ve learned to love through playing it… it all makes it feel important. Fun values and random events make the game feel “deeper”, like there’s a vast world you’re getting inconsistent glimpses into, and Gaster seems to be presented explicitly as a secret that takes digging to discover. Digging is explicitly encouraged with more content and tidbits and clues.

And as you learn the puzzle is harder and harder to solve, as the clues become scattered so far throughout the game world and tied so deeply to the plot and characters, the “answer” feels more and more important. It’s an illusion. A trick. A sleight-of-hand. There’s no depth, no substance to it. Just signs and symbols of depth around an answer that isn’t. We know the answer isn’t deep or important because – by definition – there is not an answer at all.

I say it “undercuts Undertale’s cohesiveness as a work” because again, I think Undertale wants to be set down and for the player to be finished with it. But Gaster simultaneously hooks the dedicated player into an unfinishable puzzle.

The Gaster mystery is the kind of thing you have to seal away in a glass box, or else it doesn’t work. It’s a mystery you can’t treat as a mystery. It’s an ouroborus. Despite the act of eating and the concept of body length being things that demand concrete resolution, it’s not a resolvable thing. You can’t finish it, you can’t resolve it. You can only abstract it and understand it for what it is.

I love W.D. Gaster. The mystery of omission is incredibly tantalizing to me, on a deep level. I want to dive in, I want to solve this character. I want to look at the science, and find all the secret grey kids, and piece together every last crumb of the universe. I stayed up until midnight to get the survey program that turned out to be Deltarune, and I was disappointed when it did. I wanted more pieces of the puzzle, not more puzzle. W.D. Gaster is always the promise of more puzzle, but without the solution. The solution isn’t just missing, it’s impossible. The mystery itself is predicated on it not itself being solvable. I hate W.D. Gaster.