Sometimes steam will give you a coupon for a random game that isn’t very popular. And so this is how my evening went:

in case there is any ambiguity in tone, I think everything discussed here is terrible 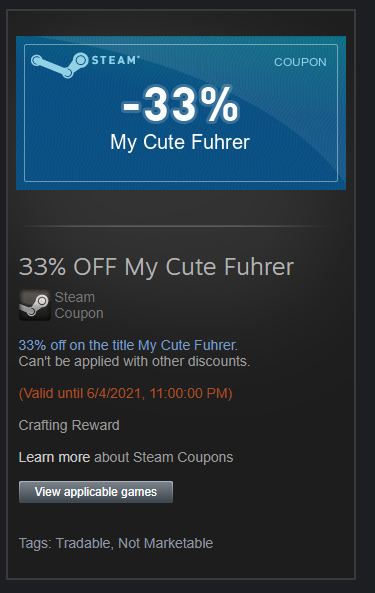 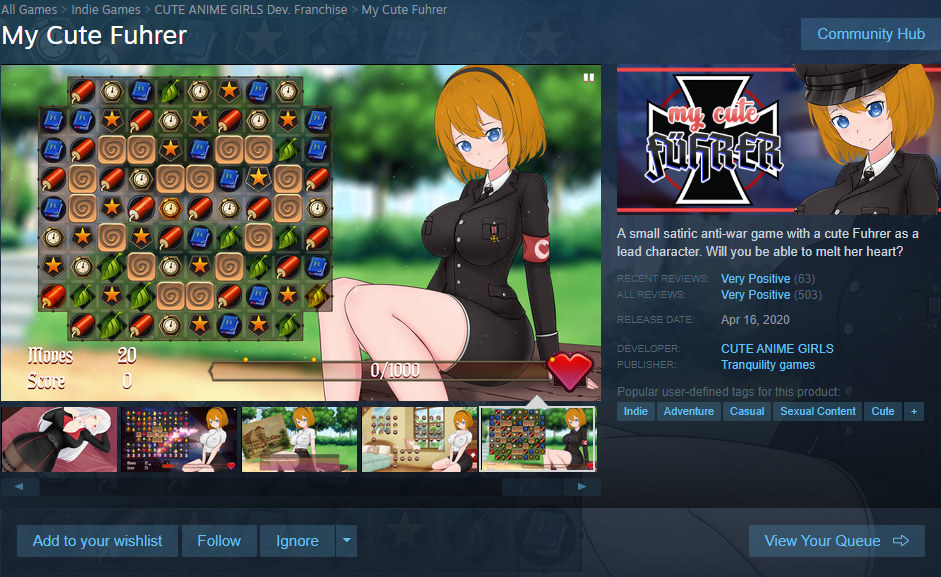 Hans, are we the baddies?

There’s a lot wrong here, right off the bat. Just as an exercise in seperating out a few things from the everything wrong here, let me try to name some, in no particular order: 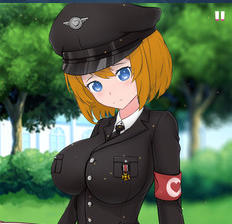 I’m gonna really push through this and flip through some of these promotional materials, and this main character is so clearly supposed to be anime Hitler, you have no idea. I mean, in addition to being the Fuhrer with a capital F, I’m seeing another promo screenshot here and her interests apparently include painting and “taking over the world”. If I had to guess, they end there too, but I am absolutely not buying this piece of garbage to find out.

Blake recommends this game. He has played it for 15 hours. 17 people found this review helpful. 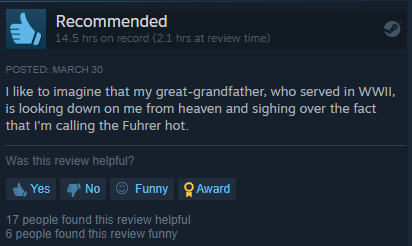 Now I see this huge review – by someone whose steam avatar is somehow an anime girl with a steam border that is also an anime girl – that actually seems to be an attempt to give a serious review, but oh my god it’s so wrong 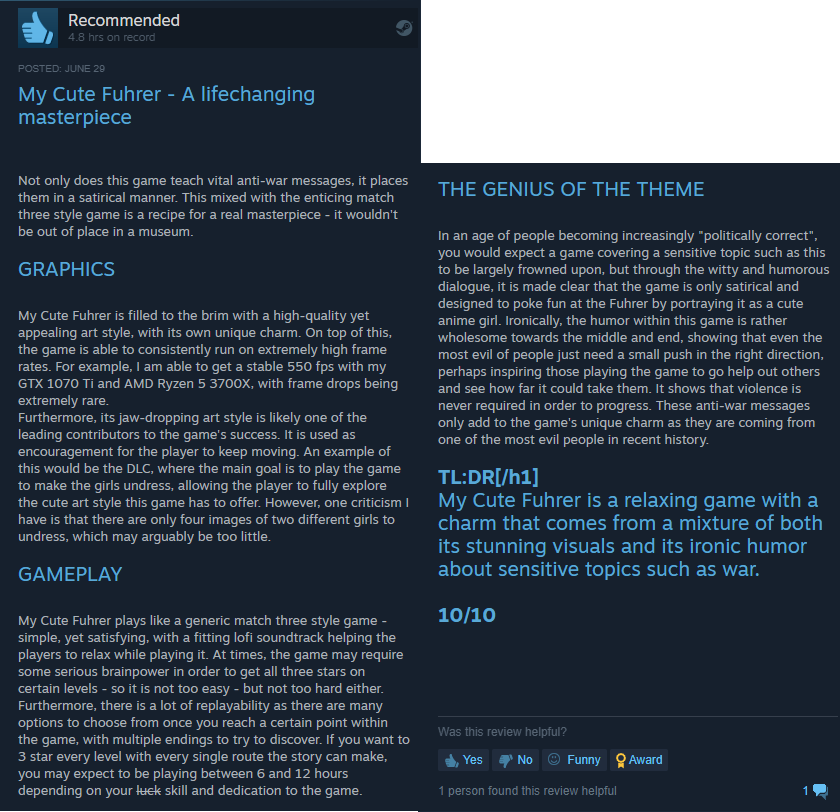 Not only does this game teach vital anti-war messages, it places them in a satirical manner. This mixed with the enticing match three style game is a recipe for a real masterpiece - it wouldn’t be out of place in a museum.

In an age of people becoming increasingly “politically correct”, you would expect a game covering a sensitive topic such as this to be largely frowned upon

yes you absolutely would expect that I wonder why

There’s a rare review mixed in here where someone actually gave the game a thumbs-down:

I might be tempted to argue here that there might be other reasons not to recommend this game other than personal taste, but I’m going to bow to the expert here, since after all he’s played the game for 254 hours.

Steam will let you sort reviews by “most helpful”, so let’s go there and grab the #1 most helpful as one last review:

Well, if unlike the vast majority of the 503 people who have reviewed this game, this game somehow isn’t for you, there is that whole CUTE ANIME GIRLS Dev. franchise. 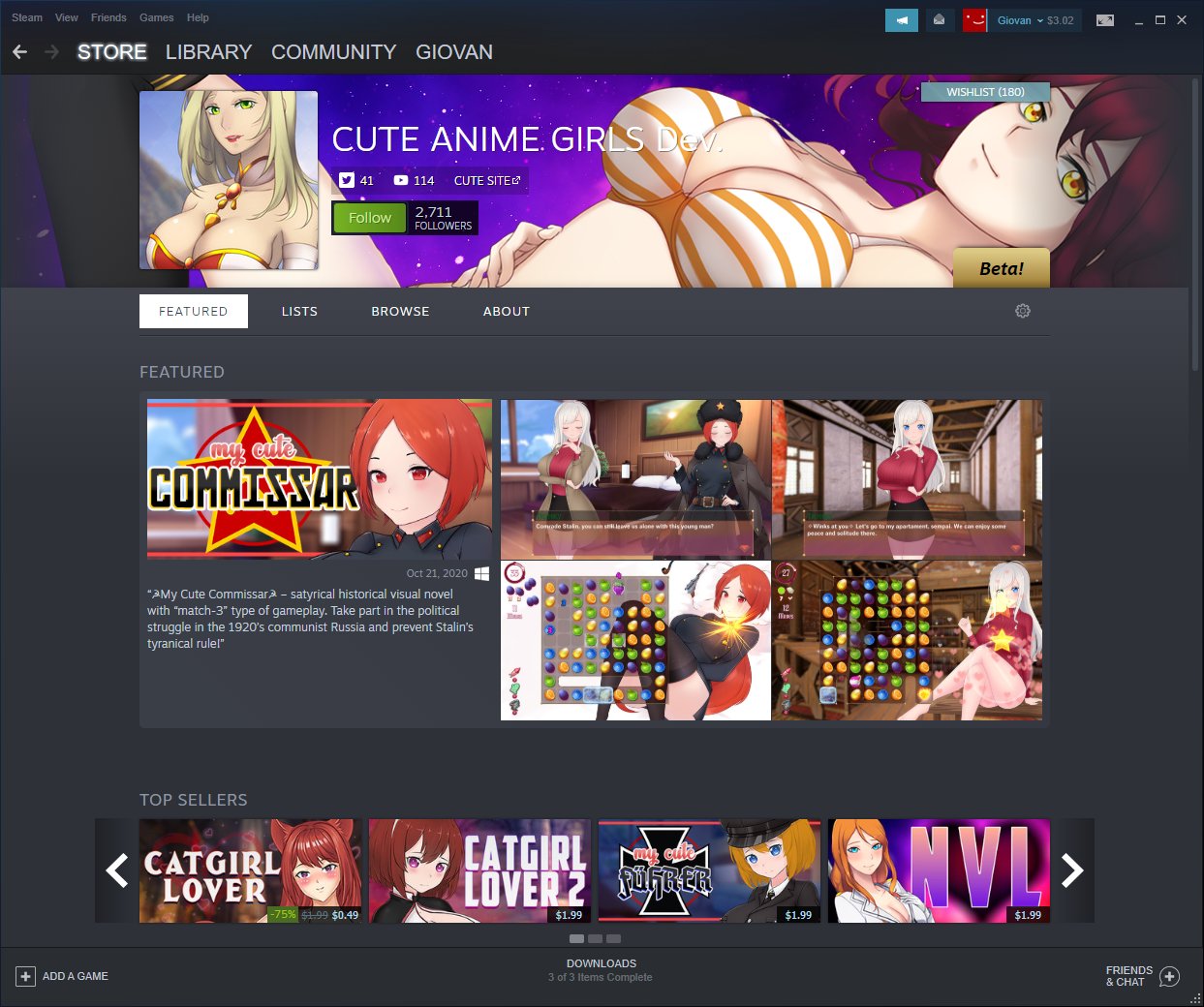 Good news though. If you don’t have a coupon but still want to save a couple dollars, you can-

…you can get the dictator pack. 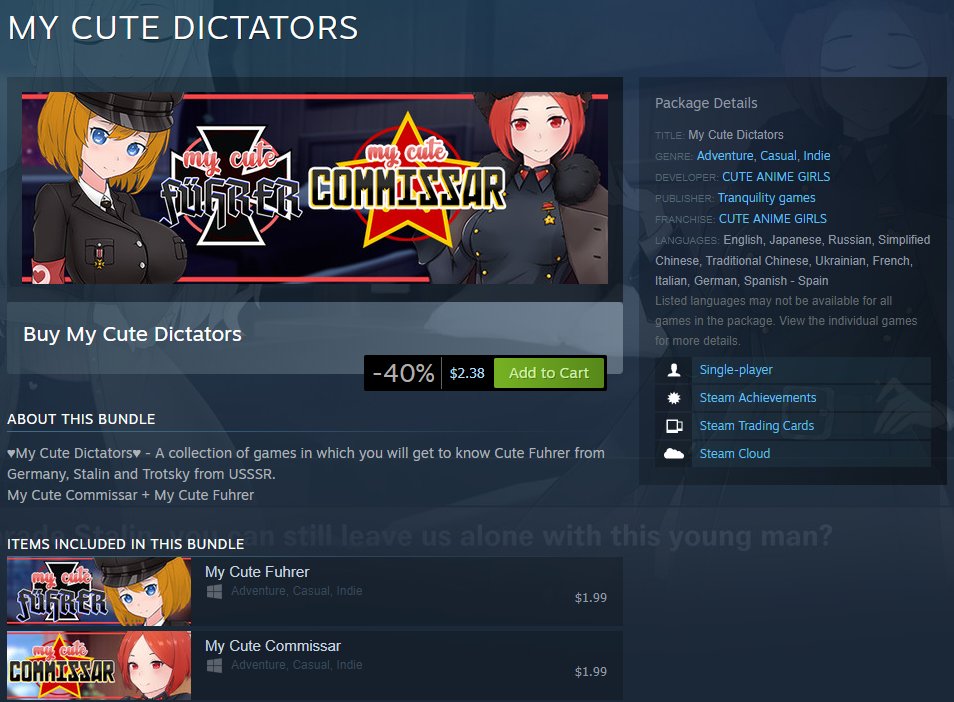 so, in case you thought there was anything to the “oh, it’s an anti-war message” thing they slapped on at the end there: that is not why this game exists. you can tell, if you look very closely. 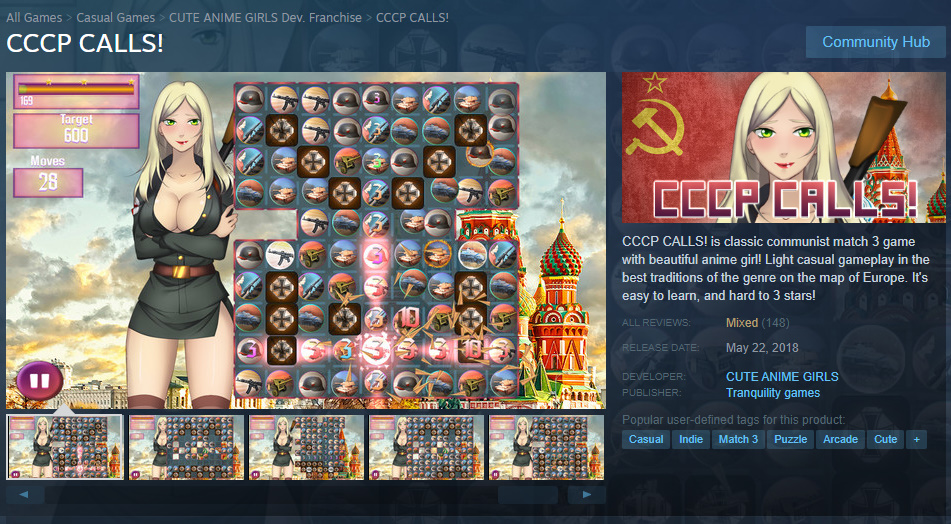 yes, all the screenshots are of the same thing

There appears to just be the one anime facist this time around, with the single pose and facial expression, but that’s because the art focus for this game was on the iron cross orbs you match.

I think I can stomach exactly one more thing about this game, so let’s check out the Steam community discussion board:

finally, this opinion has been promoted to the sphere of legitimacy, thanks to cute anime girls franchise on steam discount sale coupon

for as long as the internet’s been around, there have been deranged people who sketched anime hitler on deviantart or whatever, but the fact that this is now a profitable business model to directly pander to these people… hurts a little bit more, I think

oh, and there’s free DLC that replaces all the character art in the game with nude versions, because fuck me of course there is