During the years when Homestuck updated regularly, I usually had some sort of update notifier that pinged me when a new page was posted. But since Homestuck usually updated daily, I ended up just keeping a tab open and refreshing it. And that’s pretty much how I kept up with other serial media on the internet, for years. A writing blog that posts regular updates? Keep a dedicated tab open and refresh it occasionally. Comic? Tab. To this day, I have a “serial” browser window that’s just tabs of sites I check regularly. (Or imagine I might want to check regularly, at least.)

please don’t tell anyone how I live

Of course, this is terrible. The biggest problem is browser tabs are expensive. If you have a tab open, that takes up a dedicated chunk of memory, even when you’re not reading anything. CPU too, probably, if the site has JavaScript running on it (which is to say, is either decades out of date, or this one). Not to mention the clutter.

Unfortunately, dedicated browser tabs fit specific use case of keeping up with serial media well. Social media feeds – all of them, Twitter, Facebook, Tumblr, Reddit, YouTube – are explicitly “media aggregators”, services that combine multiple media sources into one feed. This is no good for serial media. If you’re following multiple sources, they likely update on different schedules, and updates from the more active ones will bury updates from those slower. Even email updates have this problem. No, you need a dedicated space for each source (but not each update), which a dedicated browser tab will get you.

There is a good system for this, though: RSS.

RSS (Really Simple Syndication) is a fantastic technology that has fallen out of favour in the mainstream lately. It works like this: the media source puts up a small file somewhere that notes the dates, titles, and (optionally) content of posts. And that’s it. There’s no API, it’s just a file people can read if they want. It’s like traditional syndication, but instead of selling articles to multiple distributors (as with syndicated cartoons), you’re distributing articles to many consumers directly.

I’m generally speaking in terms of articles and posts and written content here, but RSS is designed for a wide variety of media. Most notably, RSS is the backbone of podcasting. Podcasts are just RSS feeds: lists of links to audio files annotated with episode titles and descriptions1. Podcast apps (“podcatchers”, as people who try to describe things accurately sometimes call them) just collect and display that information.

RSS people will immediately jump to pining the loss of Google Reader. For years, Google Reader was the de facto RSS reader, but since it was a web application – and one run by Google, no less – it was killed in 2013 with no viable alternative. For a while, anyway; people have since written some pretty nice RSS apps, but there was a huge hole for a long time. 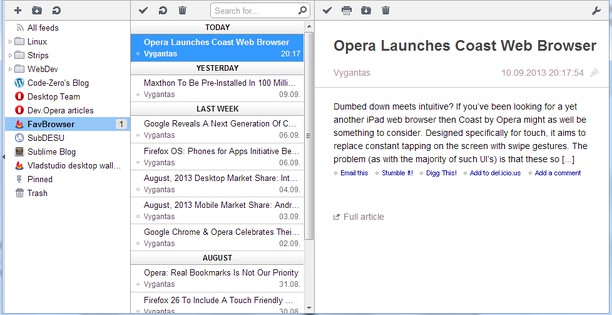 Despite RSS being perfect, as I mentioned already, RSS isn’t popular anymore. Not popular among media sources, anyway. A lot of sites do still have RSS feeds hidden away somewhere, although some require an additional tool like RSS Bridge to act as a middleman. But, in general, there’s been a huge push over the past 20 years to move away from user-controlled content management and toward content vehicles like Twitter and Facebook, where Platforms2 can sell ads, direct you towards the content they think you’ll be interested in, and generally “optimize engagement”. This can be good, of course in cases – recommendations for related accounts and YouTube channels are a great discovery mechanism – but it’s obviously not the right thing for all cases.

And so, without RSS or an equivalent solution in the mainstream, most people are left with just a handful of bad options.

Just a few months ago I broke down and got a dedicated desktop feed reader, Fluent Reader. You can configure categories of sources, set up notifications, and configure when and how FR checks sources for updates. It’s still an application running in the background, but it’s leagues better than keeping tabs open.

Hey, guess what you can subscribe to with RSS? This blog right here. That’s what this little guy is about:

Also, even cooler, if you make a comment on a post and want to know if someone replies, you can subscribe to the RSS feed for the comments.