If you asked me what I expect “VR” to look like, I would answer lowpoly, wireframes, etc. You know, the SUPERHOT vibe, or the crisp plastic cartoon vibe of Virtual Virtual Reality or VRChat, or maybe even a little Quadrilateral Cowboy. Boneworks is not that. Instead of freely-manipulated wireframes and polygons, we get… this: 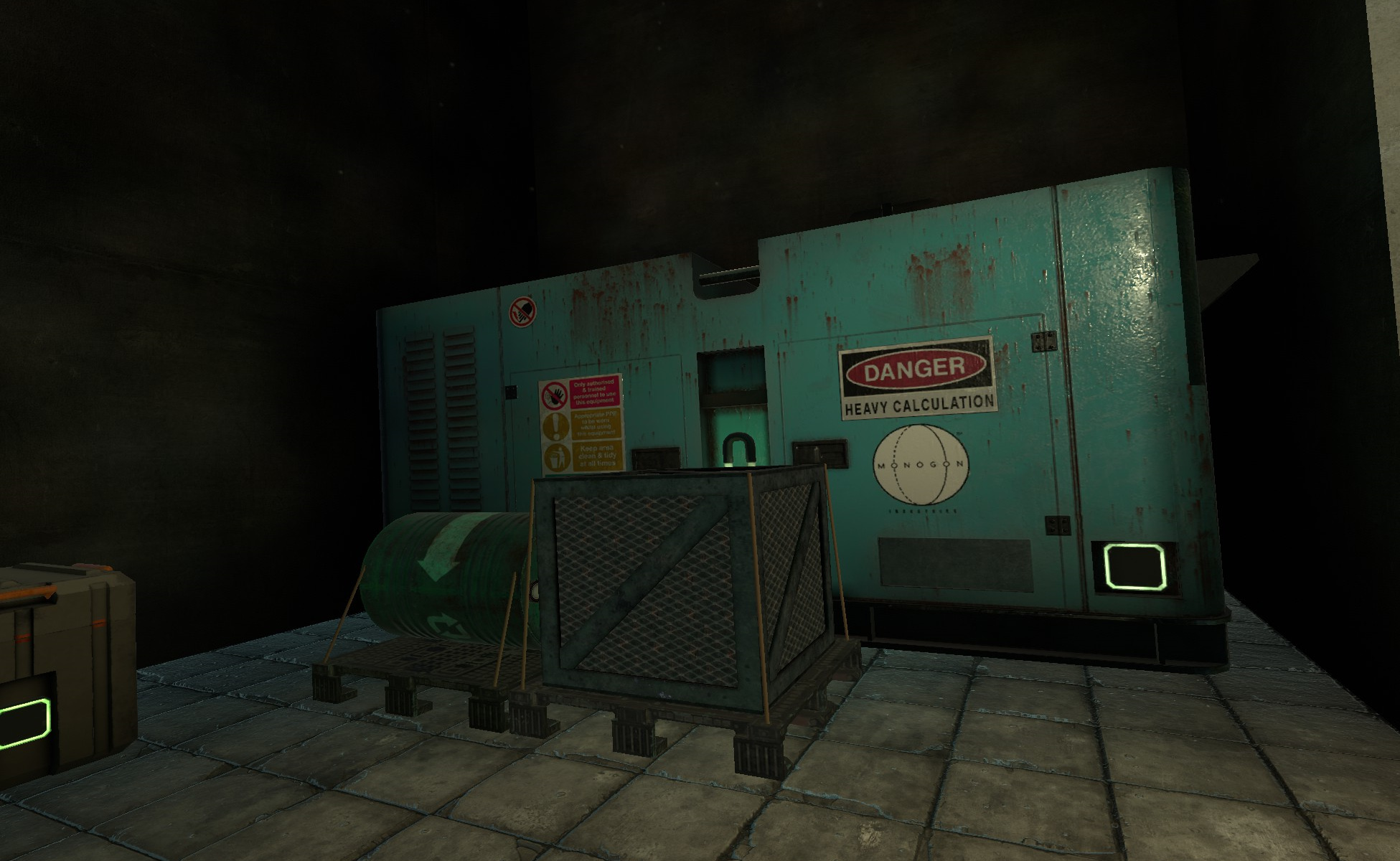 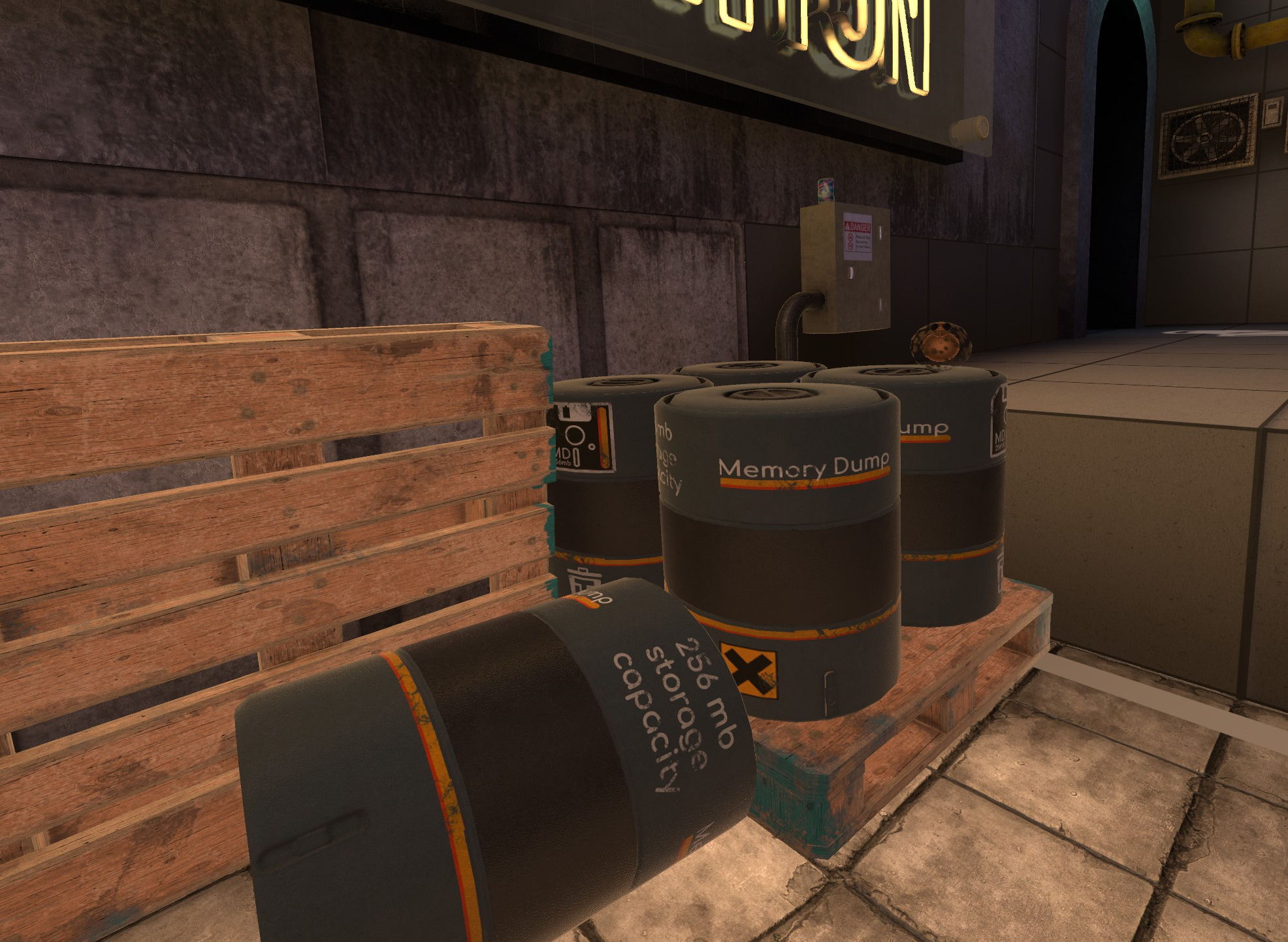 Boneworks’ aesthetic goes in a wildly different direction. Everything in the world is industrial and thoroughly utilitarian. There is a deliberate theme of substantiation rather than abstraction permeating the game’s design.

At first I thought it was a visual gag (“What’s this barrel full of, anyway? Oh, data, haha”), but no, it’s consistent throughout the universe and turns out to be a core part of the world.

I love this approach, both for its aesthetic effects and for its function as a storytelling device.

First, the world of Boneworks is VR, in-universe. The intro cutscene shows the main character putting on a VR headset, and they load in a third-party USB drive that shows up in the virtual world.

The game explicitly exposits that Monogon advertises Myth OS as a “virtual metropolis designed as an all encompassing operating space for a digital lifestyle, constructed almost entirely by artificial intelligence.” 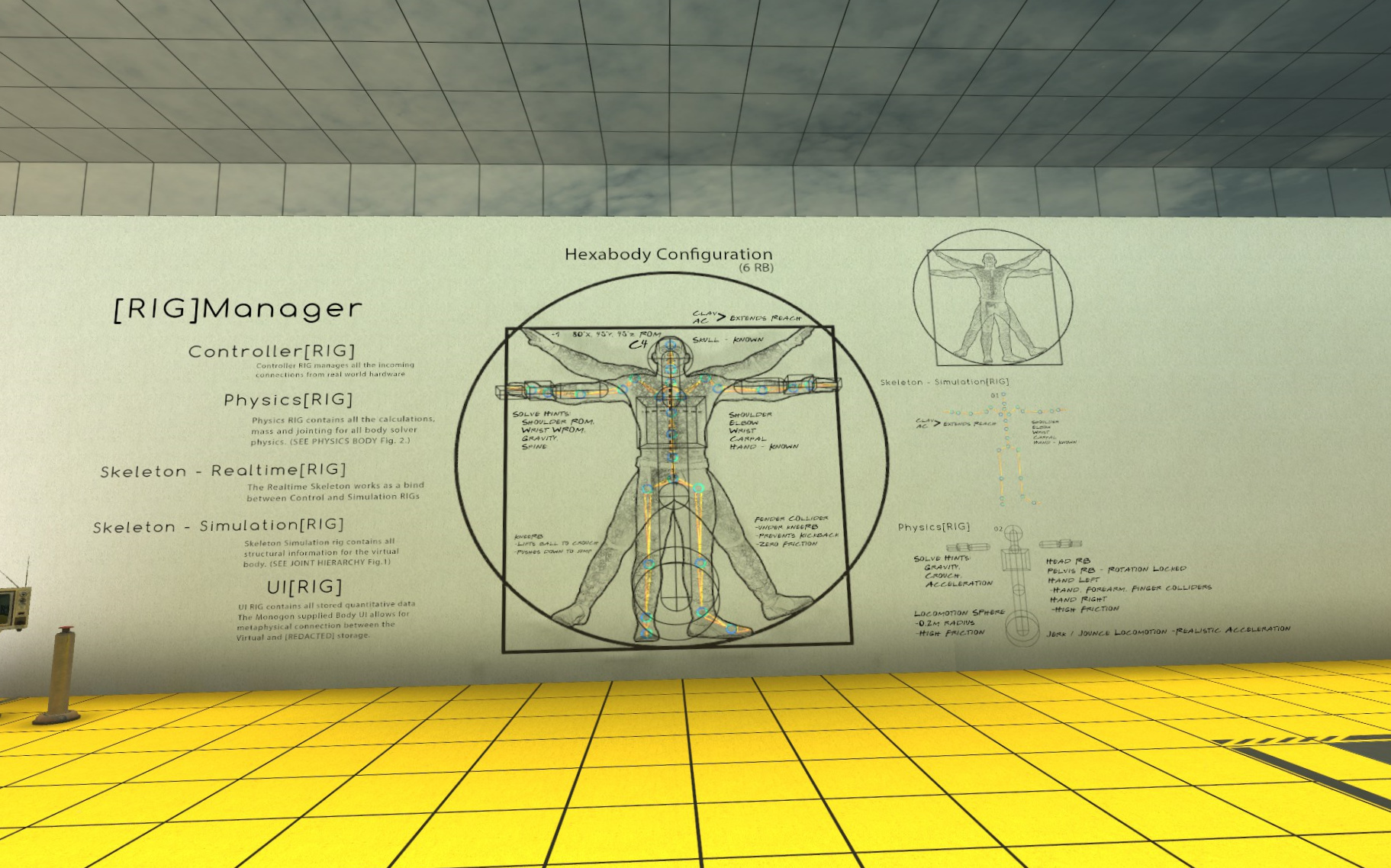 We see this in a fascinating space called “The Museum of Technical Demonstration”, an in-universe showcase of MythOS and Boneworks’ features. It serves as a tutorial, but narratively it’s a fascinating mixture of exposition and developer commentary. The exhibits show how the game developers architected the physics and interaction model, because canonically, the in-universe company Monogon did the same architecting and development of the same software. There’s a bit of this developer/developer overlap throughout the game, especially in the graffiti. (“Too many rigidbodies” is a problem for both sets of developers, I’d imagine.)

So it’s VR, simple enough. But – and this is the main thing – the actual game world doesn’t make sense for an unconstrained virtual space. In fact, it’s thoroughly the opposite. There’s a theme of physical mechanical machinery and machina being necessary for things in Boneworks. 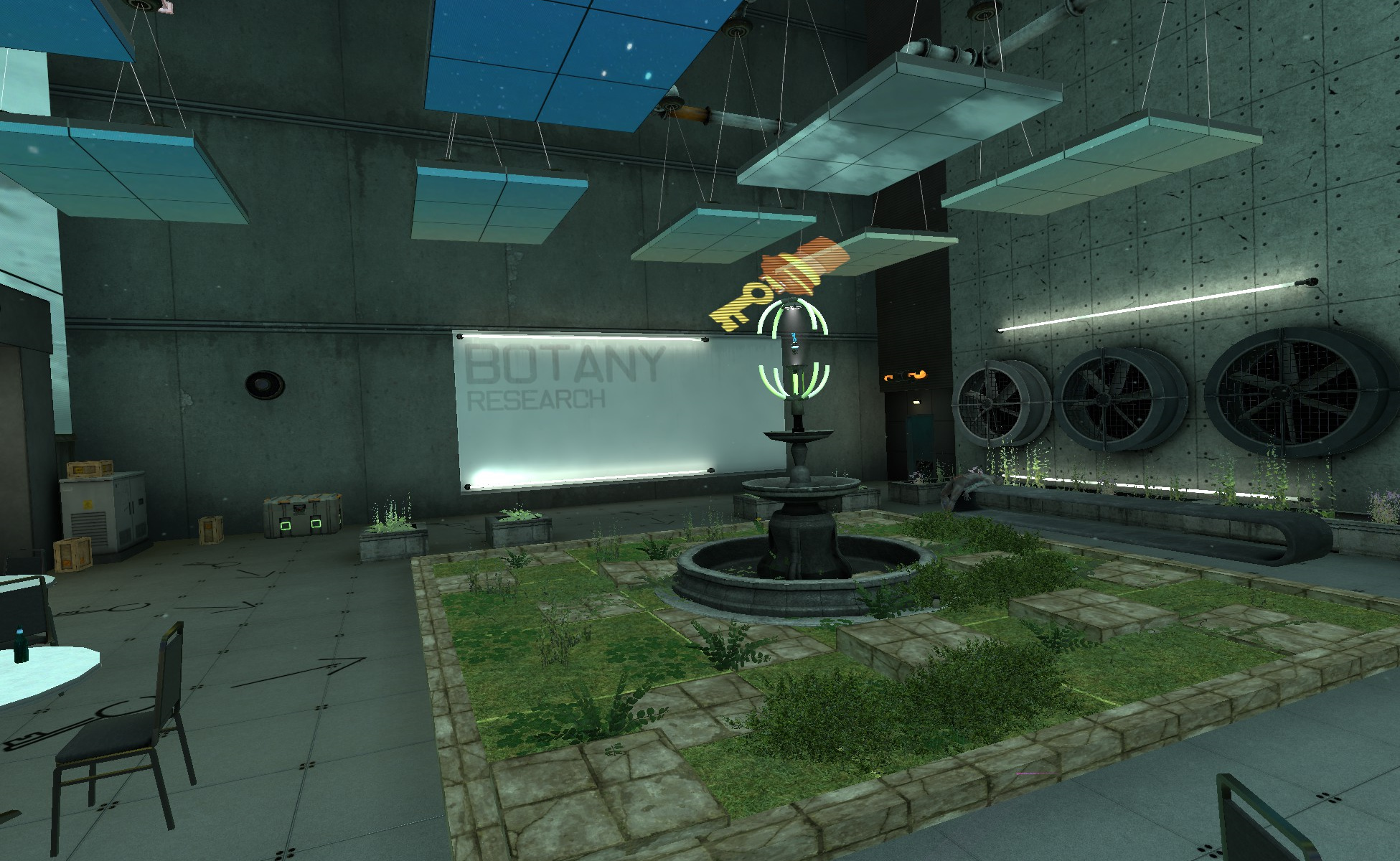 Why does a virtual city need a botany lab? 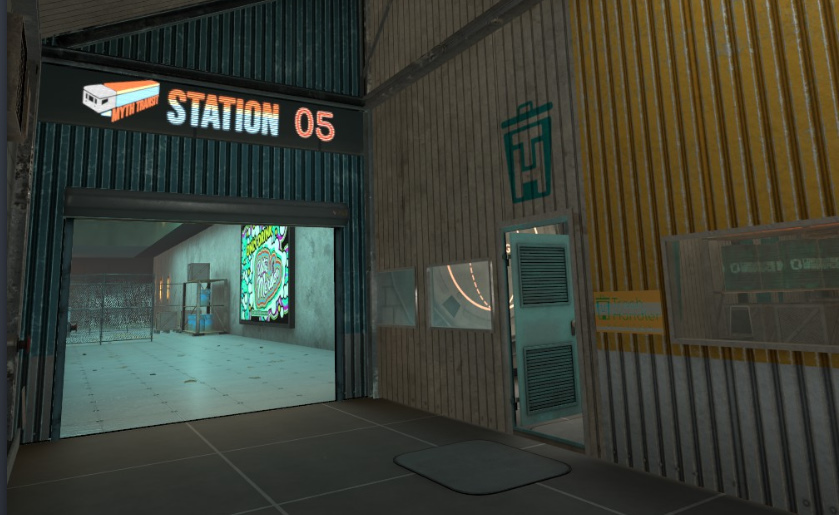 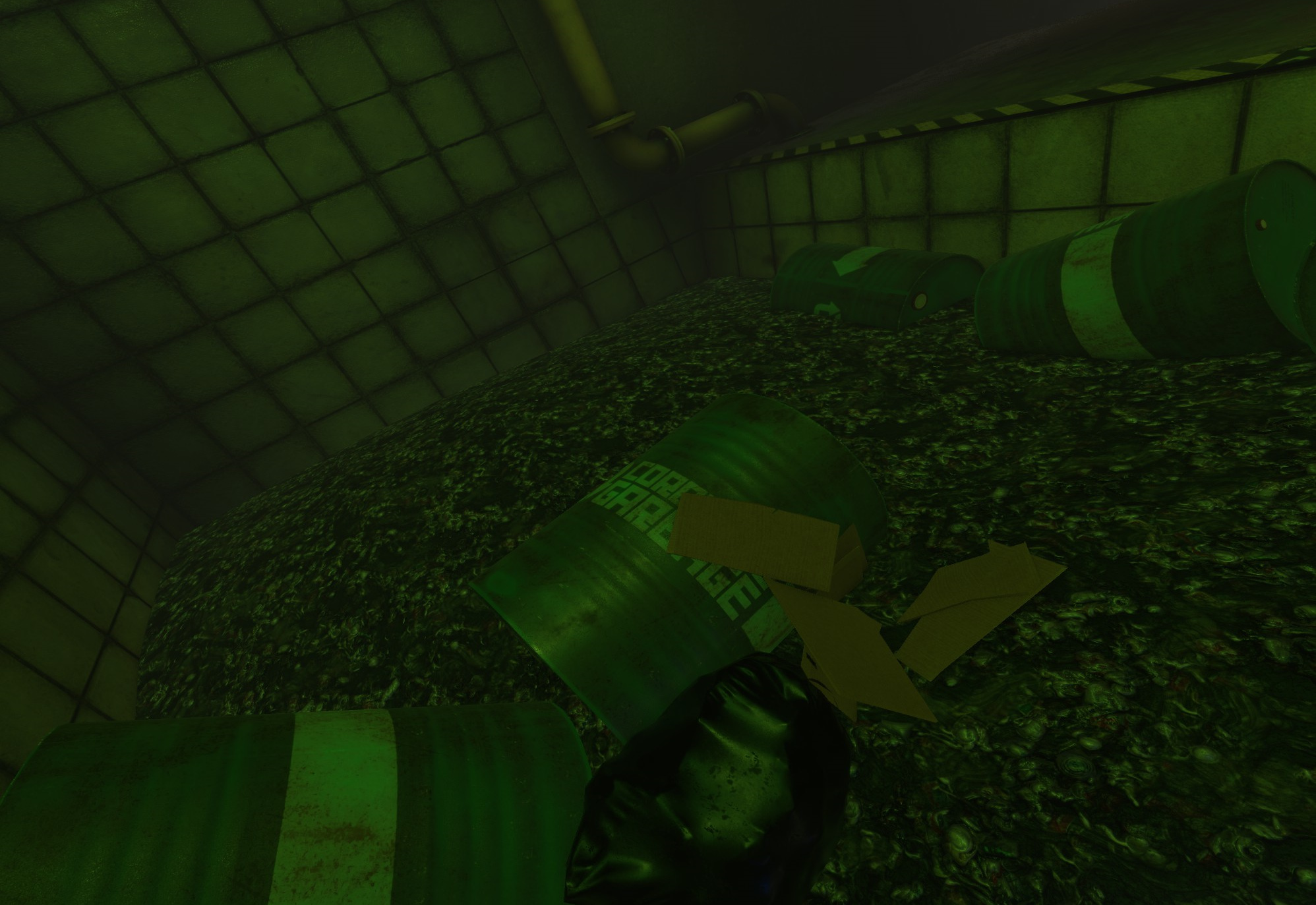 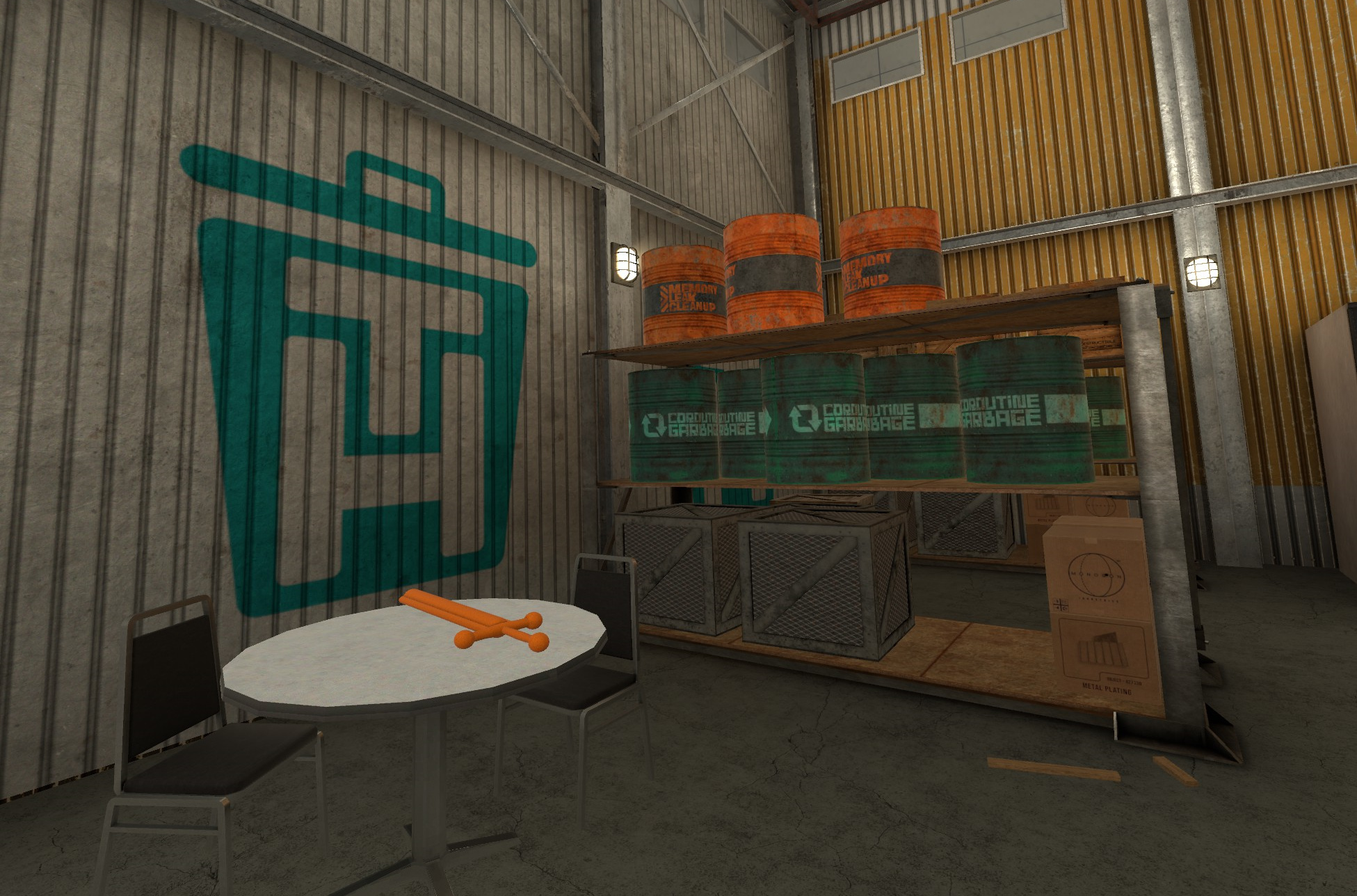 The most defining feature of MythOS City is – of all things – its physical infrastructure. Myth City is FULL of utilities and infrastructure a virtual city shouldn’t need: waste management, sewer systems, import/export companies with warehouses and transportation lines… all massively expensive in terms of time, space, and power. But, actually, it seems like Trash Handlers and various shipping networks constitute the majority of the space in the city so far. 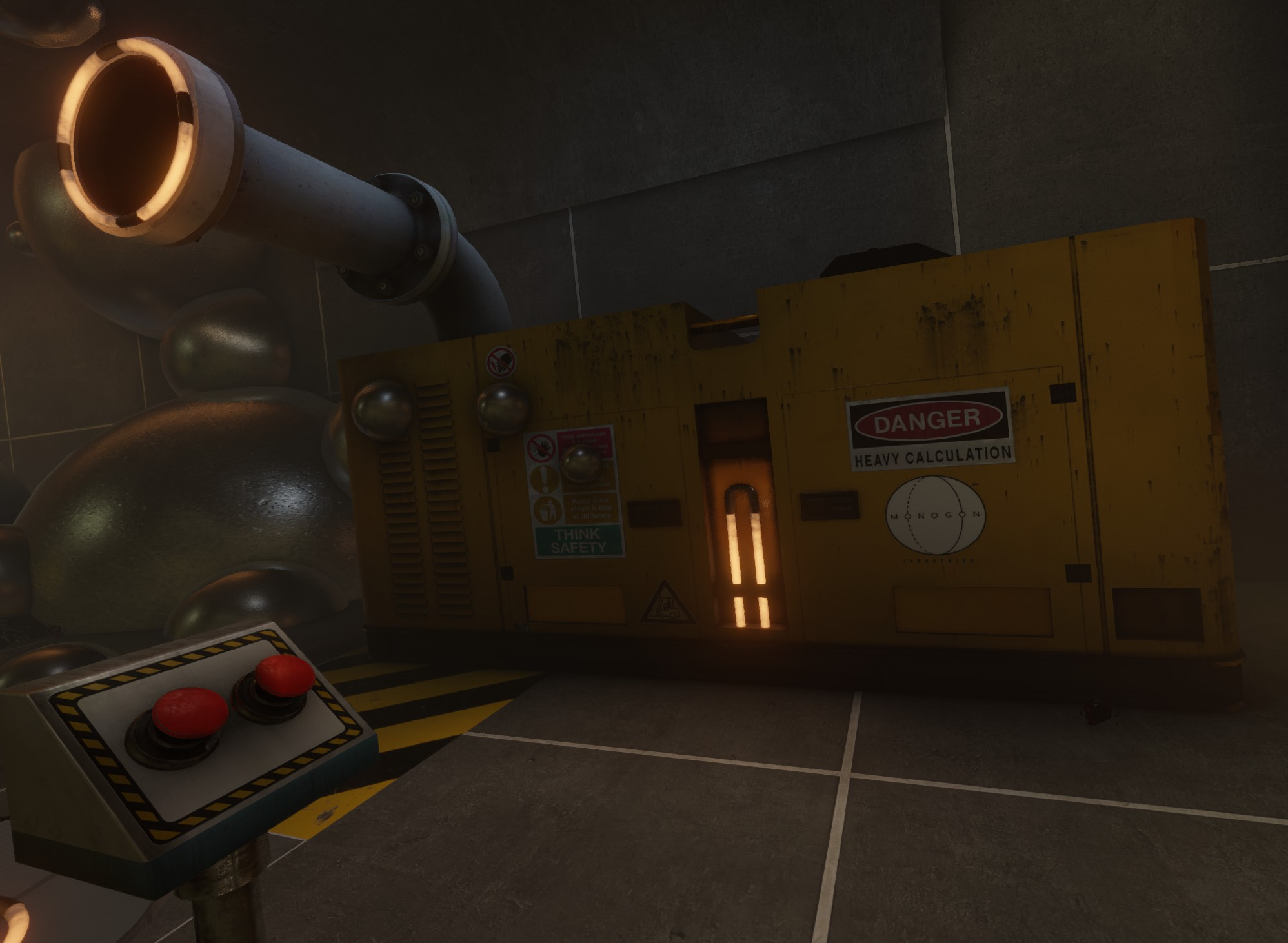 There’s a significant amount of machinery in these industrial settings too, labelled “DANGER! Heavy Calculation” as if the computational load of the process was tightly coupled to the physical object. That’s what I mean by substantiation: the opposite of abstraction, taking an idea and turning it into a substance that’s necessary to the idea’s existence, not just a representation of it. (This idea isn’t totally unlike Hack n’ Slash’s algorithm rooms, although it’s not a clean mapping.)

From a gameplay perspective, the whole world is constructed of physics objects. There’s no hand-waving or floating hands, the player character’s body is controlled by inverse kinematics and everything reacts to everything else, because it has to.

This all works remarkably well. In Bonelab, you have a control on your elbow. The elbow of your VR body isn’t tracked or controlled by any sensor, the game gets all its information about where your elbows need to be from your hand position and the physics sim. And it’s almost always right! It feels so good I feel weird that I don’t have a string on my elbow right now. 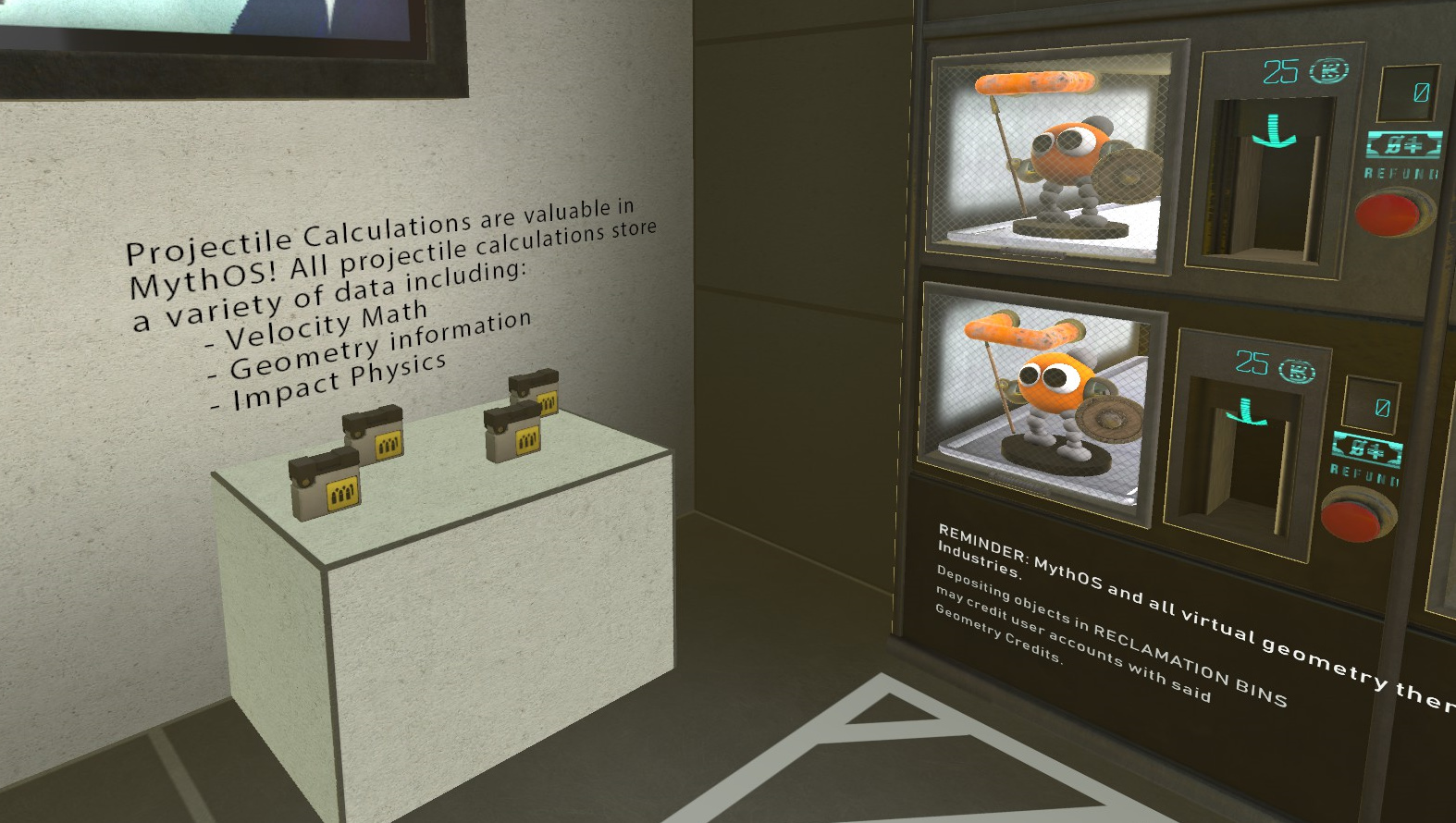 But what really caught my attention, what really told me I had to talk about this, were the dev tools. That is, the in-universe dev tools you can unlock in the sandbox mode.

There’s a physgun-style object manipulator called the Dev Manipulator, or the Gimbal Gun, that lets you move and rotate large objects. It looks like this: 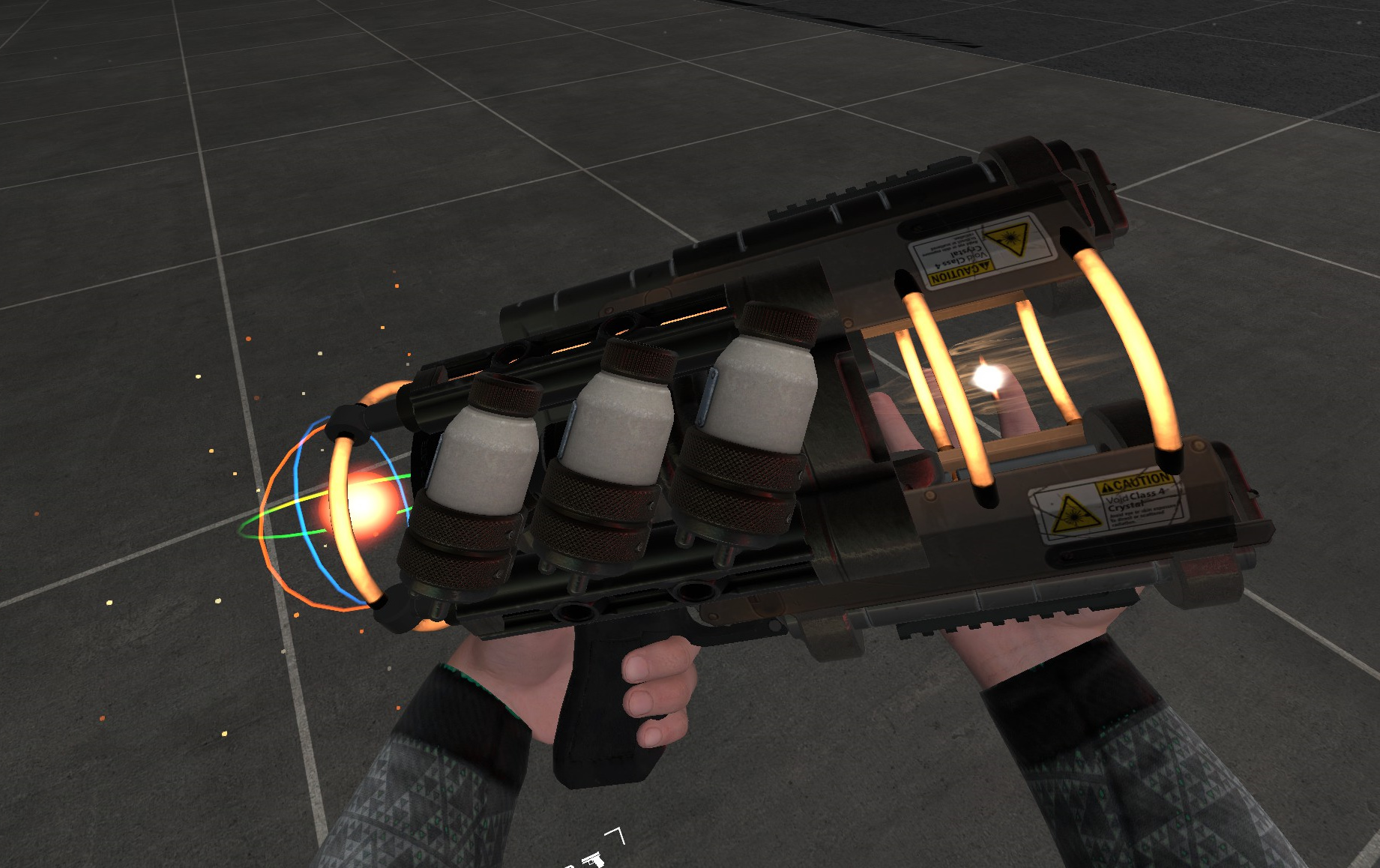 It has caution stickers in multiple places warning about the danger of exposure to the void crystal. The exhaust fans spin at full tilt and sparks come off the internal mechanism in a way that makes you feel the strain the objects are under from the sheer amount of exertion required to lift things. 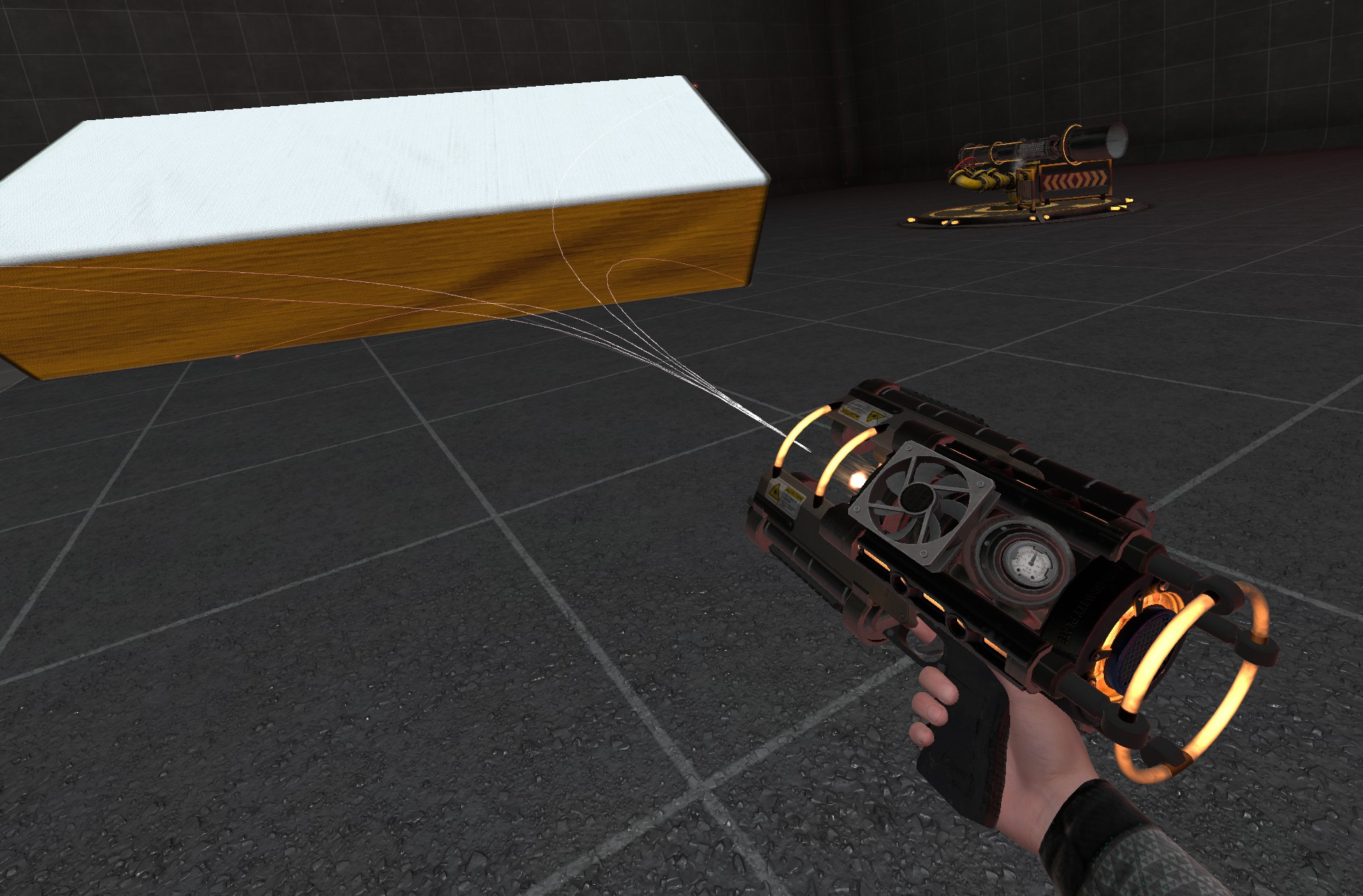 When fired, you can see how the physwires it emits search for points of articulation and exert specific force on each of them in order to get the object to the desired position. The player just has to point and shoot, but the gun itself is clearly doing a lot more than that.

This is another museum-like case of exposing real information to the player using the world: the engine does have to make these calculations, but the design of this gun shows that fact in the text of the game itself. 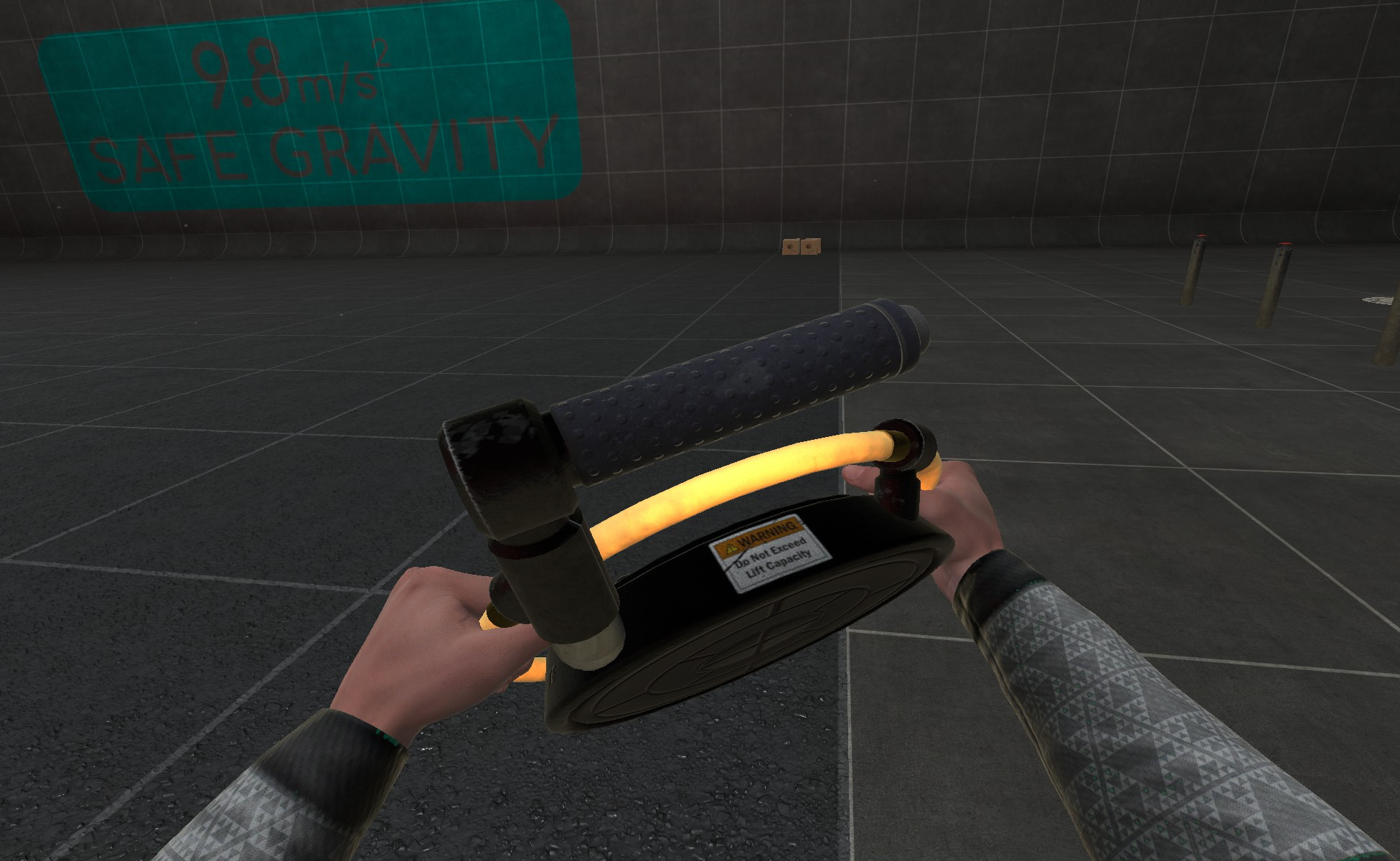 Even the tools the city management AI uses have warning stickers: “Do Not Exceed Lift Capacity!”

Every attempt to manipulate the world seems to groan at the effort of it.

Gammon’s capsule gun is much more sophisticated than Monogon’s🔗

In Bonelab, we actually get a look at void gadgets developed by different companies.

Boneworks has a development utility gun that’s available in the sandbox mode: 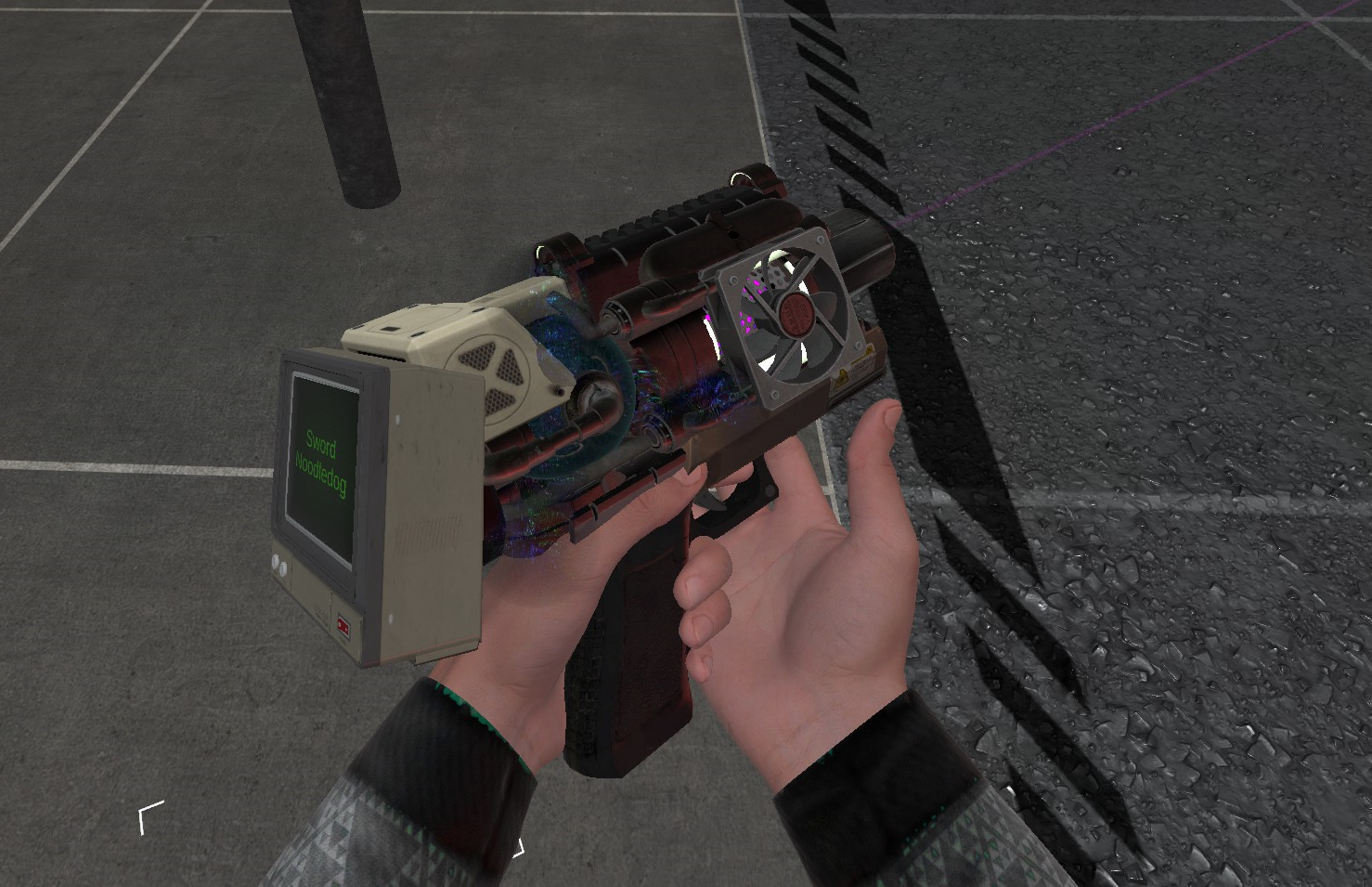 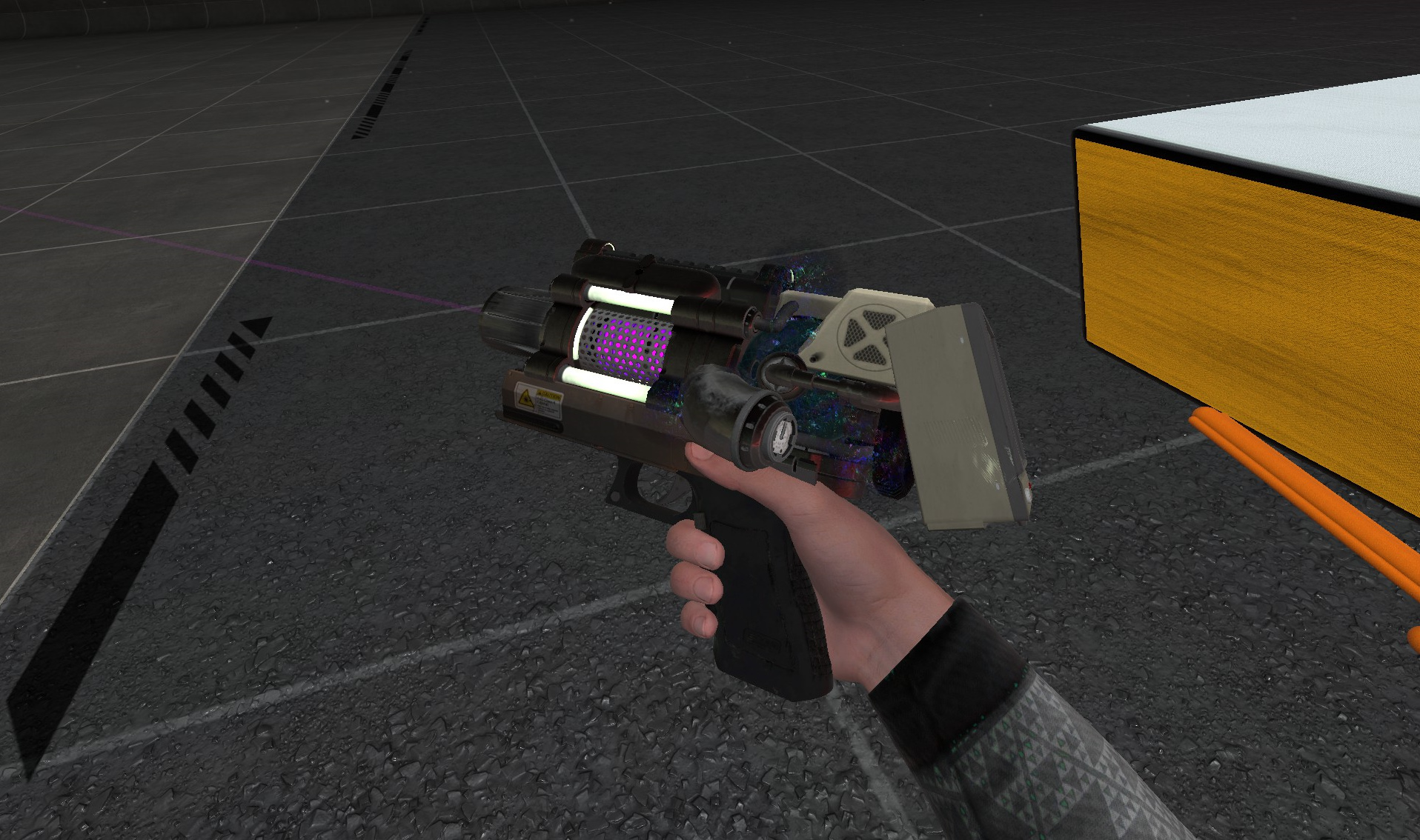 Monogon’s utility gun is a metal contraption built around an orb of void energy with a pistol grip grafted on the bottom. It looks very much like a prototype, with dials and warnings and tubes running everywhere. The highly dangerous void energy looks barely contained and can be seen leaking out onto the player’s hand. There’s certainly no branding or model information.

Monogon’s chief competitor, Gammon, also has a presence in voidspace. (In fact, Monogon probably found the void in the first place by reverse-engineering Gammon tech.) Here’s Gammon’s equivalent of the utility gun, as seen in Bonelab: 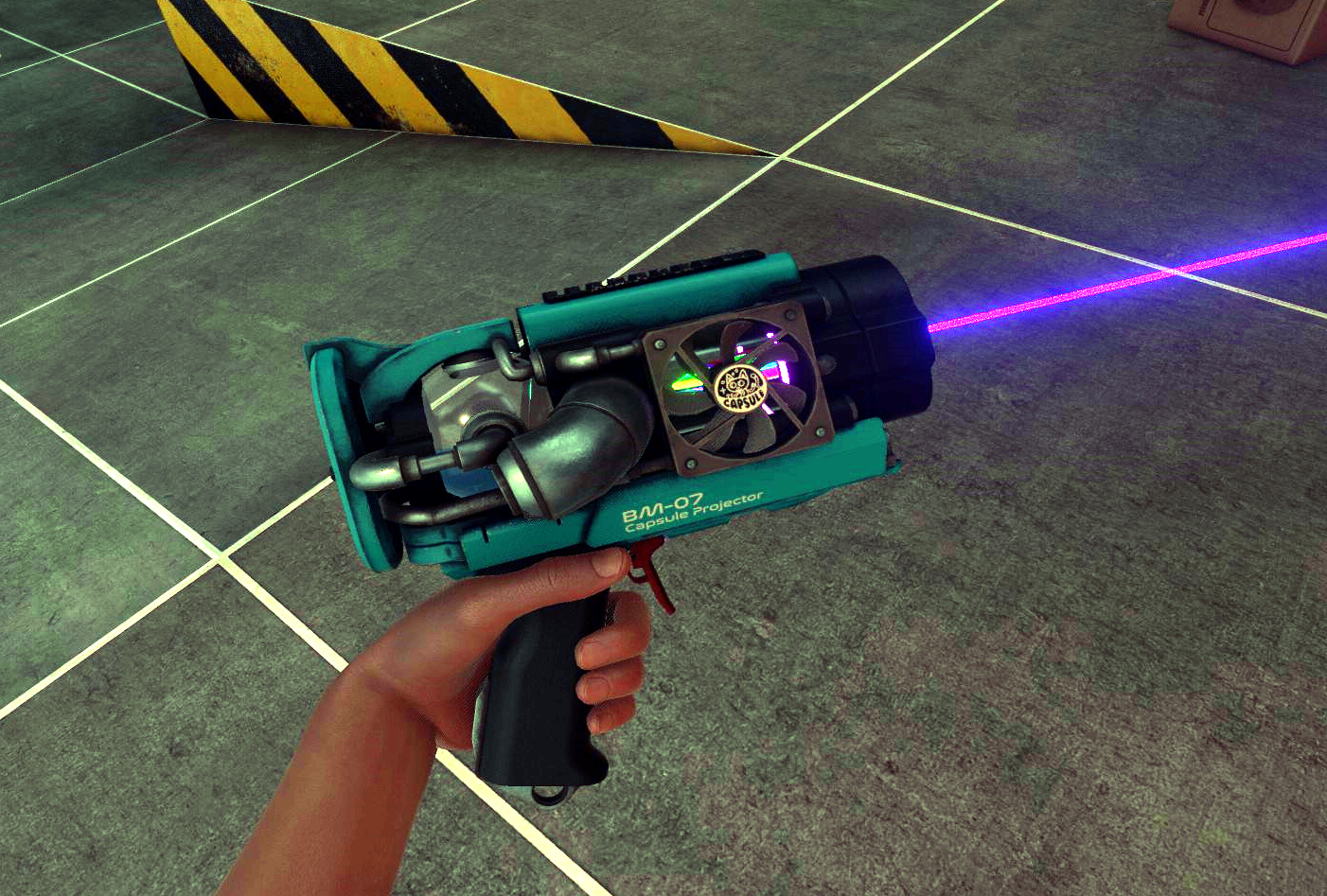 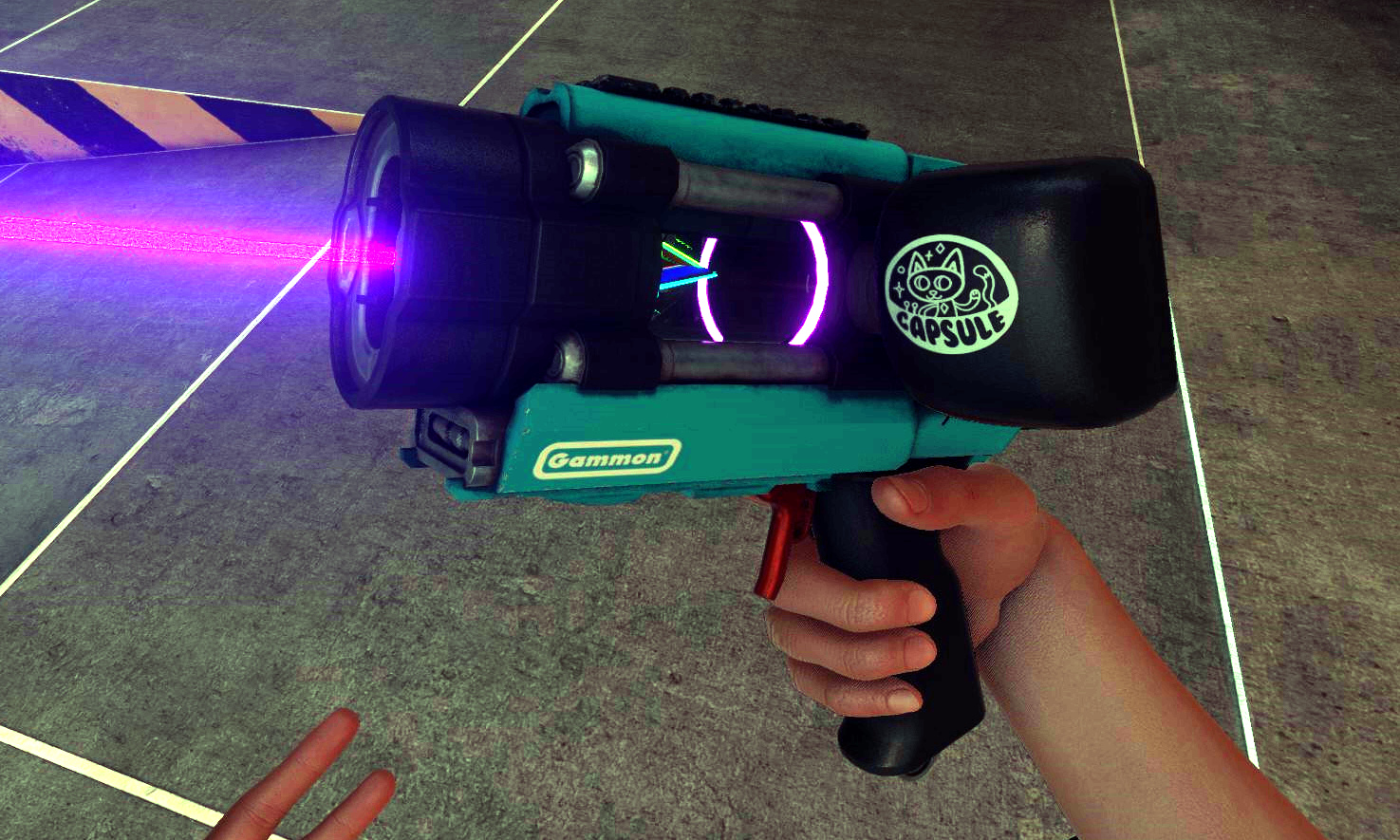 Gammon’s spawngun is starkly different. Its body looks like custom-molded plastic designed to house and focus energy from a gatcha capsule. It’s labelled the “BM-07 Capsule Projector” and even has printed “Gammon” and “Capsule” branding on the left. The grip looks custom-built, and it even has an LCD screen on the side housed in its own bevelled plastic frame. It still has a fan, but everything else that screams “unstable prototype” is gone.

No character ever acknowledges the existence of either of these tools anywhere in the story. There’s not a single line of dialogue about them and they don’t show up in the main story. But their design still tells us worlds about both companies’ positions and philosophies. How great is that? 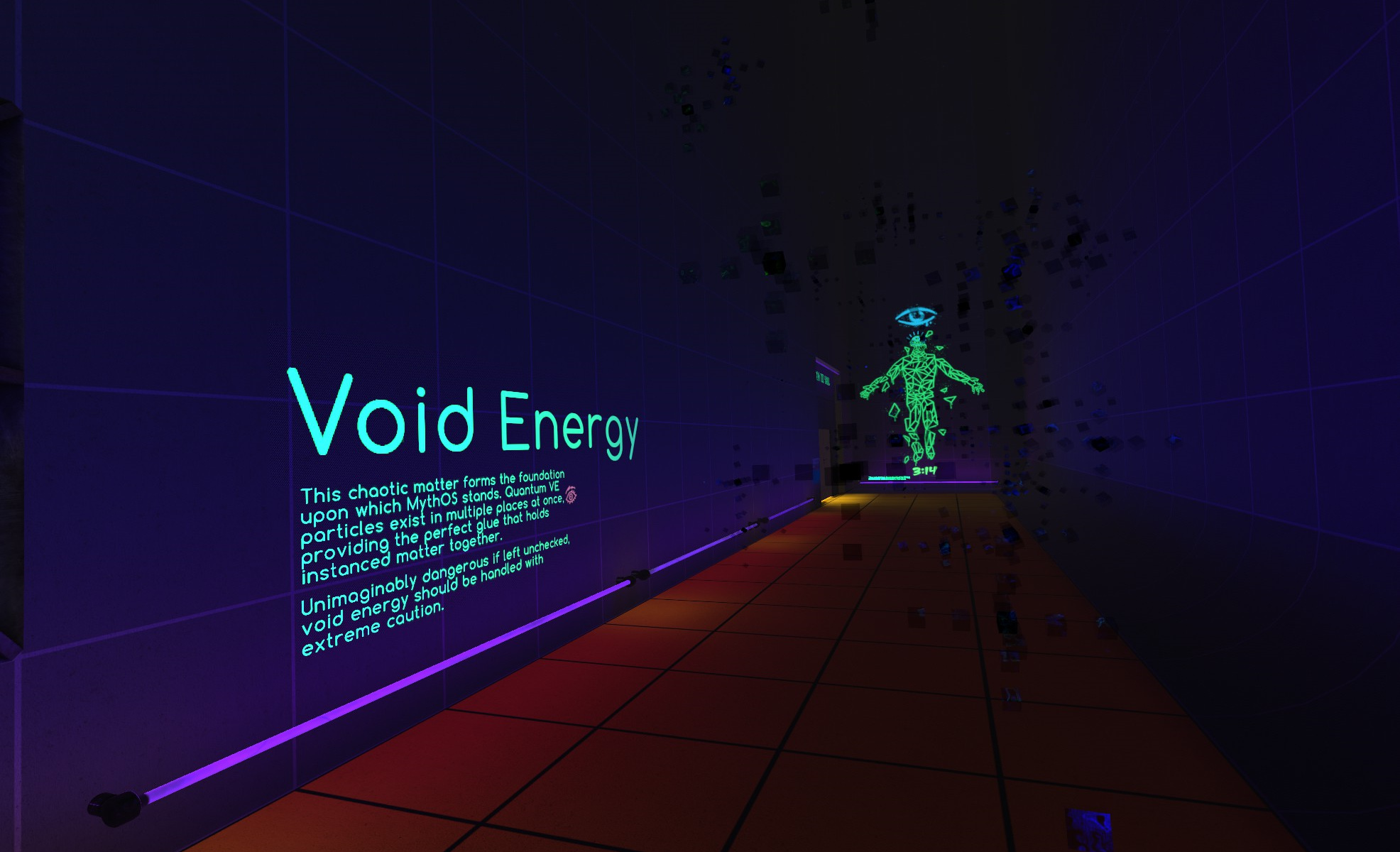 So what actually is the titular “Boneworks”? Despite the name, it’s not the skeleton rig, which the museum just calls the [RIG]Manager. In fact, Boneworks not discussed in the museum at all. (Although Bonelab implies that there are BONEWORKS engine branded exhibits added to the museum later, we don’t ever see them on display.)

What it actually seems to be is the “game engine” that Monogon is using to build MythOS. It serves as a way to abstract the low-level functions of physics handling, player control, object interaction, player resurrection, and potentially low-level asset management, all independently from the design and function of the city spaces. MythOS isn’t built on “bare metal”, it’s built using the Boneworks engine.

What constitutes the “bare metal” the Boneworks engine itself drives is a much more interesting question. It seems to be split between traditional digital computing infrastructure – headsets, USB drives, memory, etc – and the transcendental Void: an existing space they discovered (and that their headsets pipe directly into peoples’ cerebral cortexes), and not something they can freely control. MythOS interacts with the Boneworks interface so it doesn’t ever have to touch the void itself. Boneworks, though, does. It’s still a virtual reality, but it’s not necessarily artificially simulated, and because the void has its own rules there are constraints on what can be built and how.

From a lore perspective, the exact line between the constrained and unconstrained aspects of the world isn’t spelled out mechanically, but that’s fine. The game we’re given is about moving and shooting, not fully understanding the fictional mechanics of the world. That’s a game I’m imposing on the story myself, which means Stress Level Zero isn’t obligated to make it winnable. Tragically.

I will stop talking now🔗

Bonelab is out now, and it’s very good too. People online are ragging on it, but they’re wrong. It’s basically Boneworks: Opposing Force. If you have VR gear, I definitely recommend Boneworks, and if you like that, Bonelab too. If you’re familiar with VR control, that is. Otherwise maybe play something like Half Life: Alyx first, to get your sea legs.